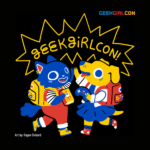 2 responses to “A Q&A with #GGC19 Featured Contributor, Tanya DePass”