My relationship with novels became much better over the years, and was a relief during the stressful years of study. During that time, I also grew to love comics. So during a vacation in 2016, instead of reading L’Engle’s novel, I read the new graphic novel adaptation by Hope Larson. For those of you who may not recall the plot or, like me, were not exposed to this novel, the story is about a girl named Meg who does not feel like she or her family fit into their town. Both her parents are scientists, and some of her siblings seem to know how to navigate the social norms of life but Meg believes she is ugly and not smart enough. Meg’s father goes missing, and she embarks on an intergalactic adventure to save him with a classmate, Calvin, her younger brother, Charles Wallace, and magical strangers. Meg’s backstory reminded me of my own, excluding the scientist parents.

When they finally find Meg’s father on the planet Camazotz, the children are terrified, and not only because of the implications of why their father was imprisoned. Specifically, Meg, Calvin, and Charles Wallace find the world haunting due to the society being strangely homogenous. 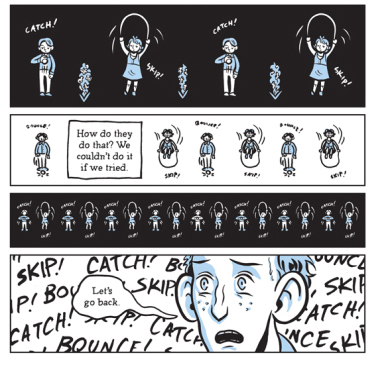 One set of panels from the graphic novel shows the extent of the synchronous nature of the planet’s population. Later in the story, it is shown that any aberration from the norm is met with extreme hostility. 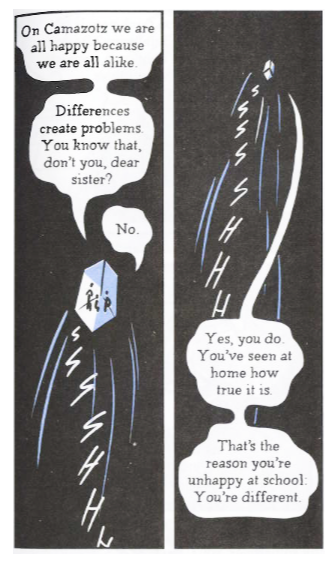 A Wrinkle in Time addresses why the opposite of diversity is so confining and unwelcoming. In another panel, Charles has succumbed to the darkness and starts trying to convince Meg to join him. He says, “On Camazotz we are all happy because we are all alike.  Differences create problems.” This statement is frighteningly common when talking to those who oppose mixed race societies and even spoken by well-meaning people when discussing who one should associate with and how people should behave. However, social scientists and STEM researchers have known for years that diversity does the opposite.

Take Marie Tharp, the female geologist who mapped the ocean floor and first proposed continental drift as a theory to explain huge valleys in the oceanscape. This theory was laughed at and dismissed as “girl talk”. An animated clip featured on National Geographic describes her discovery and the opposition she experienced.

In China there was a woman named Tu Youyou who, with no graduate degrees, researched how to keep people from dying of malaria during the Vietnam War. She turned to traditional chinese remedies and eventually saved millions of lives by discovering Artemisinin. Tu Youyou became one of the three scientists that won the Nobel Prize for medicine in 2015.

Then there are the women featured in Hidden Figures: Katherine Johnson, Dorothy Vaughan, and Mary Jackson. They were black women with expertise in math, computer science and engineering hired by NASA during 1949-1953 and were instrumental in the US dominance of the space race.

A Wrinkle in Time discusses how the freedom to be yourself can be messy, but it is still better than the alternative: mindless conformity. At the end of the novel, Meg has a new perspective on her struggles in society: how being different was a gift not a curse; that her new friend, Calvin, was drawn to her uniqueness; that the pressure to be like everyone else could be used by authority as a tool to strip someone of their power.

I feel this homogenous nature and pressure to conform all over academia. The atmosphere at some universities seems wonderful, organized, and safe on the outside, like the planet Camazotz. However, just below the surface, there is the constant tension to fit in, a competition to be the most intelligent, and a culture steeped in unspoken rules and customs that many of us who are underrepresented in the academy cannot grasp firmly. This results in added complexity and an emotional toll simply in being a person of color in higher education.

I was therefore elated to find out that the upcoming film adaptation of the novel embraces the book’s celebration of diversity in the casting.  The main role of Meg is played by a virtually unknown actress named Storm Reid. Having the lead character played by a young black actress for any blockbuster, let alone a Sci Fi/Fantasy film is uncommon. It seems that the Disney studio wants the public to see how it is devoting resources to inclusion. The film budget is over $100 million and is the first film with this kind of price tag to be directed by a woman of color.

The director for film adaption of Wrinkle in Time is Ava DuVernay, who is known for directing the award-winning film Selma, and the documentary 13th.  DuVernay decided to cast other beloved characters with well-known actors of color such as Mindy Kaling, Andre Holland and the almost universally loved Oprah Winfrey. The character of Meg’s mother, the brilliant female microbiologist, is played by Gugu Mbatha-Raw. I am incredibly excited about this film. From the success of Hidden Figures, I believe the American public is ready for and welcoming of movies that feature women of color in STEM.

The new teaser trailer for the film shows the same eerie scene about the dangers of conformity, but turning a story where the main characters were assumed to not be racially diverse into a visual celebration of intersectionality is comforting. It shows the world that we are ready for stories of strong girls and women of color, especially in the sciences. And while we still have a long way to go for parity in representation, I am hopeful that the shifting attitudes towards underrepresented groups will show audiences–pop culture and academic alike–why exactly diversity and inclusion matters.

Regina Barber DeGraaff teaches physics and astronomy at Western Washington University (WWU).  Regina completed her PhD in Physics in 2011 from Washington State University with a focus in Astrophysics, studying globular cluster systems.  She is also the first STEM Inclusion and Outreach Specialist at WWU with a mission to cultivate and maintain partnerships with faculty and inclusion programs locally & nationally that are devoted to the recruitment, retention and support of underrepresented students in STEM.  Regina is also the host of the radio show & podcast Spark Science, a talk show which strives to make science accessible to all. A Wrinkle In Time opens in US theaters March 9, 2018.