Top 5 Reasons to Attend the #GGC19 Kick Off Party

Can you believe it? GGC19 weekend is almost here! Start your weekend early and join us tomorrow night at the Pacific Science Center for the most epic GeekGirlCon Kick Off Party yet.

Where: Pacific Science Center. You can enter through the Denny entrance, on the South side of the PSC building.

What: food, a cash bar, crafts, games, music, geeky madlibs, and so much more!

Need some more convincing? Here are the top 5 reasons why you should attend:

1. You’ve already paid for it. The Kick Off Party is included with your GGC pass, so why not go?

2. Skip the Saturday morning line.  Speaking of your GGC pass, you can pick it up at the party itself. That means you don’t have to wait in line on Saturday. Treat yourself to an extra half hour of sleep and pick up your pass Friday night!

3. Earn prizes by meeting new people. The Kick Off party is a great way to meet fellow GGC attendees. If you play a round of geeky madlibs with a person you met at the Kick Off Party, you can enter to win prizes.

4. Lots of different activities. On top of geeky madlibs, you’ll have a chance to…

5. Party favors. That’s right, there will be multiple party favors from sponsors.

Get ready to party and join us tomorrow night for the GeekGirlCon Kick Off Party!

What is it about the end of October that makes me want to carve pumpkins and eat lots of candy? Oh, right—’tis the season for Halloween!

My parents didn’t allow me to trick or treat, so my Halloweens were spent at home reading, watching movies, and eating all the candy I collected from friends. While I did end up trick or treating a few times in my life, Halloween remains a night where I stay in and stay up as late as possible. This year, I think I’m going to look through the GeekGirlCon ‘19 schedule and plan which panels to attend. 😉

Whatever you’re doing tonight—whether you’re trick or treating, handing out candy, carving pumpkins, or watching a scary movie with friends—we hope you have a fun and safe Halloween!

Can you believe that GeekGirlCon ‘19 is just 49 days away? Over the next few weeks we’ll be sharing curated lists of panels that we think you’ll enjoy. Our first list is for the Academia Geeks.

Are you still waiting for an owl to deliver your acceptance letter to Hogwarts? Perhaps you’re a teacher who wishes they could teach jutsu from the Hidden Leaf village? Maybe you dream of teaching like one of your favorite characters? If you answered yes to any of the above questions, we have the perfect panels for you!

Are you counting down the days until GeekGirlCon? Do you want more GeekGirlCon in your life, perhaps all year round? If so, consider joining the volunteer staff at GeekGirlCon!

Podcasts: Keeping My Ears Happy Since 2014

One word can sum up the reason why I got into podcasts: traffic. It was summer 2014, and I was living near Baltimore, Maryland. My commute would range from 40 minutes to over an hour of bumper to bumper traffic, and I was bored listening to the same four songs on the radio. The time spent in traffic felt wasted. Wasn’t there any way to utilize this time to learn something?

One day, as I was listening to NPR, I heard a promo for one of their podcasts. I didn’t know what a podcast was, but soon enough I downloaded a few episodes for my commute to work. By the end of the year I was hooked to podcasts such as 99% Invisible and This American Life. Thursday mornings became my most anticipated commutes, as that’s when Serial would post episodes.

There’s just something about libraries. No matter the time of day, I always see people browsing the shelves or picking up items on hold. Surprisingly, it’s never too loud or too quiet in the building. There’s just enough clacking of keyboards and soft conversations to remind me that there are people in the library with me, all using the space in their own way. For me, the library is an integral part of my life as a geek.

My love of libraries came from my father. He frequented the public library to use the computers, and to feed my never satiated hunger for something to read. Under the dim fluorescent lights I read classics like Black Beauty and The Black Stallion, and found great fantasy novels such as Tamara Pierce’s Wild Magic (surprise, I had a thing for horses). Most of these books were brought back quite late, and I have memories of paying my late fees in change. No matter how inconvenient, the library workers would take my change with a smile, and always encouraged me to come back for more books.

In middle school, I found something else to read—manga. My local library didn’t carry any comics, so I stopped visiting. I started saving leftover lunch money and used it to buy a new manga every week. I ended up with my own library of manga that my friends would borrow from, and even had a notebook to keep track of my books! After I graduated from high school, my money situation changed. I could no longer afford to buy shiny new manga every week for myself. I stopped looking for new series because I could not legally access them. The geekiness inside of me faded into the background as I struggled to figure out other parts of my life.

I don’t remember too many details from my first visit to my local King County library. I think I had just moved to Washington State, was bored, and wanted to sit somewhere with air conditioning. I didn’t know what to expect when I entered the building. Would I be there only person there? Would it be like the dimly lit library of my youth? I stepped in, and was shocked—the place was packed! Every corner of the building was in use, from study rooms to public computers. Some people were just sitting in a comfy chair and enjoying the view from the large windows. Others browsed the shelves, looking for a book cover to inspire them.

And you know what I found? Manga! The library had a whole section of beautiful manga! I stood in front of the shelves, a big grin on my face. I could finally read all the manga and comics I wanted without going broke. At last, I could feed my inner geek again.

I now visit the library several times a month to borrow all sorts of media. Through the library I watched Westworld and Star Trek: Discovery, two TV series that are only available through a subscription service. When I need a new crafting project, I’ll browse the crafting section in nonfiction. Manga-wise, I finished Fruits Basket, and am now tackling all of CLAMP’s works.

No matter your fandom, you’ll find something for your inner geek at your local library.

We asked you, our community, to GiveBIG last Wednesday—and you responded in a big way. You helped us make GiveBIG 2019 our most successful year EVER by raising the staggering amount of $16,358! From every fiber of our being, we thank you for supporting GeekGirlCon!

As our staff is 100% volunteer, each dollar you donated directly impacts GeekGirlCon’s development and longevity. Because of your generosity, we’re able to

Thank you for entrusting us with your donations. We’ll use it to pull off the best GeekGirlCon yet! 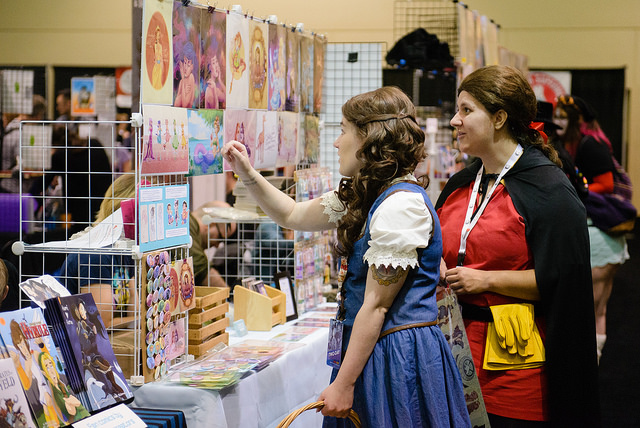 GeekGirlCon has this magic ability to bring out the creativity in all of its participants. From con-goers to panelists, GeekGirlCon lets us share our thoughts, ideas, and amazing sewing skills through costumes and programming. One particular place where the creativity magic is highly concentrated is our Exhibitor space, and we want YOU to be a part of it!