And, of course, you can watch all of this live as it unfolds on Twitch.tv! You can also take part by commenting in the stream, making donations, or signing up to be part of Extra Life yourself.

Bonus: if Andy raises enough money, we’ll see the awesome dwarf warrior Irony Stonegunz come out and DM the entire session! Irony was a HIT last year with the fans, and also made an appearance at GeekGirlCon! So if you’d like to see Irony rolling dice, or Shubz eating lumpia live on the internet, or just have a great time watching some amazing D&D action, make sure you donate and tune in for Extra Life. It’ll be worth it, I assure you. Gallery image with caption: Join Us for a Pop Culture Trivia Fundraiser This Saturday 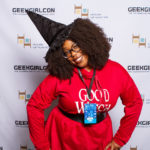 Gallery image with caption: Why We Give to GeekGirlCon