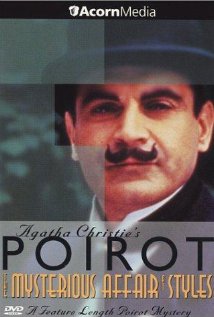 Gather round, mes amis, and prepare to exercise your little grey cells with this recap of July’s #DIYSciFilm event–in which our DIY Science Zone experts apply their chemistry smarts to the 1990 TV adaptation of Agatha Christie’s The Mysterious Affair at Styles.

Recovering from the horrors of World War I, British Army officer Arthur Hastings hopes to find peace and quiet at a country manor in the English countryside. But when the matriarch dies during the night from strychnine poisoning, Hastings enlists the help of an old friend staying nearby with other war refugees to help solve the murder: former Belgian police detective Hercule Poirot.

DIY Scientists Torrey Stenmark and Raychelle Burks are both chemists and murder mystery fans, and their interest was piqued by the poisoning storyline. They had cause for confidence in the scientific accuracy of what they were about to watch:

Agatha Christie worked as a dispenser during both World Wars. Her knowledge of poisons was first hand. #diyscifilm

Livetweet With Us: July #DIYSciFilm

Can you vaporize someone from space with a laser? No. Even with a codename like Crossbow. #DIYSciFilm

They also shared college anecdotes that I should really advise our readers not to try at home!

During undergrad we put dry ice in a bathtub and filled a suite with knee-deep fog. We almost asphyxiated ourselves. #DIYSciFilm #dontdothis

You can read a round-up of the whole event over on Storify. If you’re feeling right now like you missed out on a pretty cool event, no need to worry–it was such a hit that Torrey’s planning another one for this Thursday, July 23, at 9pm Eastern/6pm Pacific. This time around it’ll be the 1990 TV adaptation of the classic Agatha Christie story The Mysterious Affair at Styles, in which Hercule Poirot investigates a poisoning conundrum. Torrey is both a chemist and a costumer, perfectly poised to critique both the science and the fashions!

Join Torrey (@tereshkova2001) on Twitter and use the hashtag #DIYSciFilm to be part of the conversation, and don’t worry if you miss it–I’ll post a summary here on Friday.

The Mysterious Affair at Styles is Series 3, Episode 1 of the BBC series Poirot, available on Netflix. 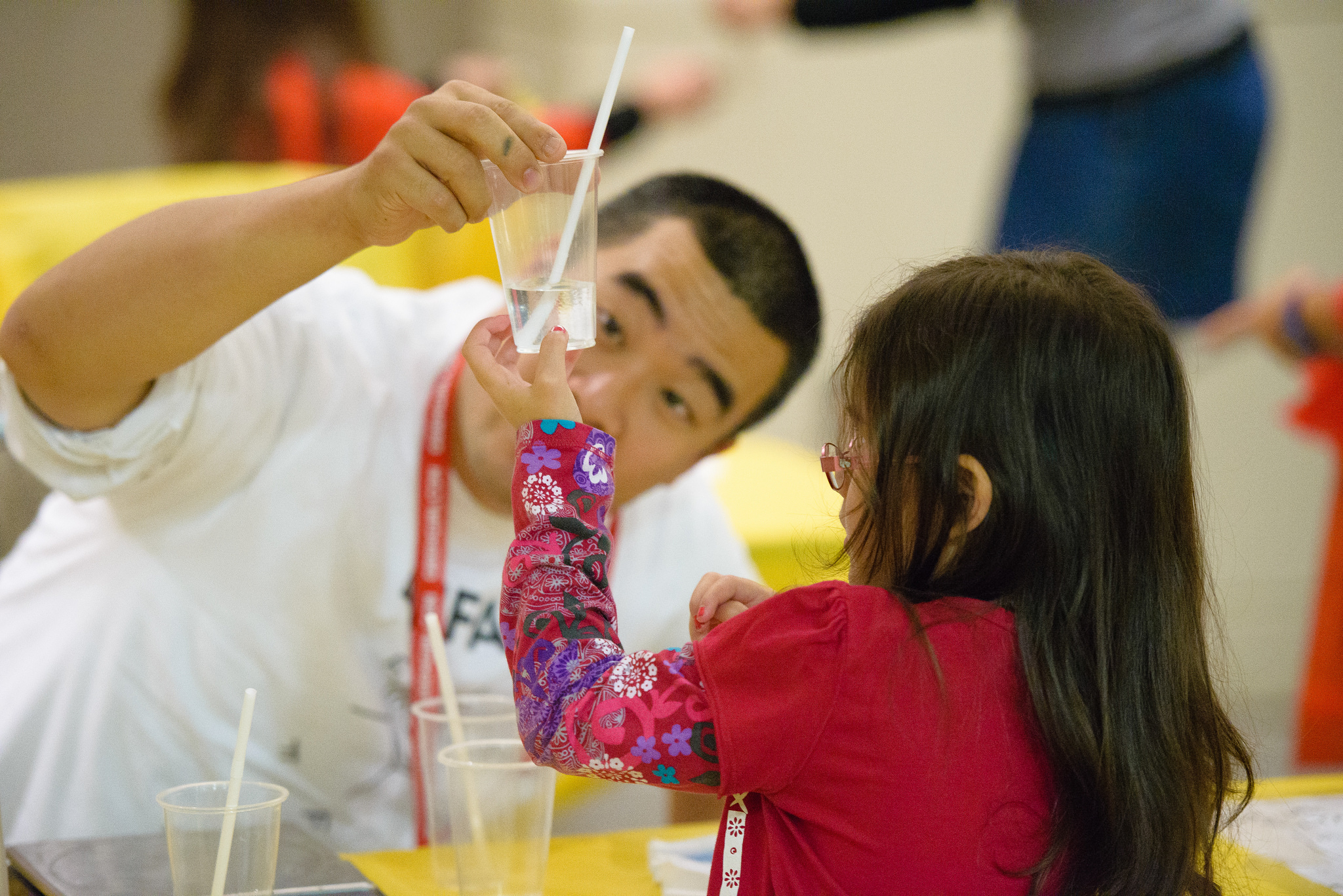 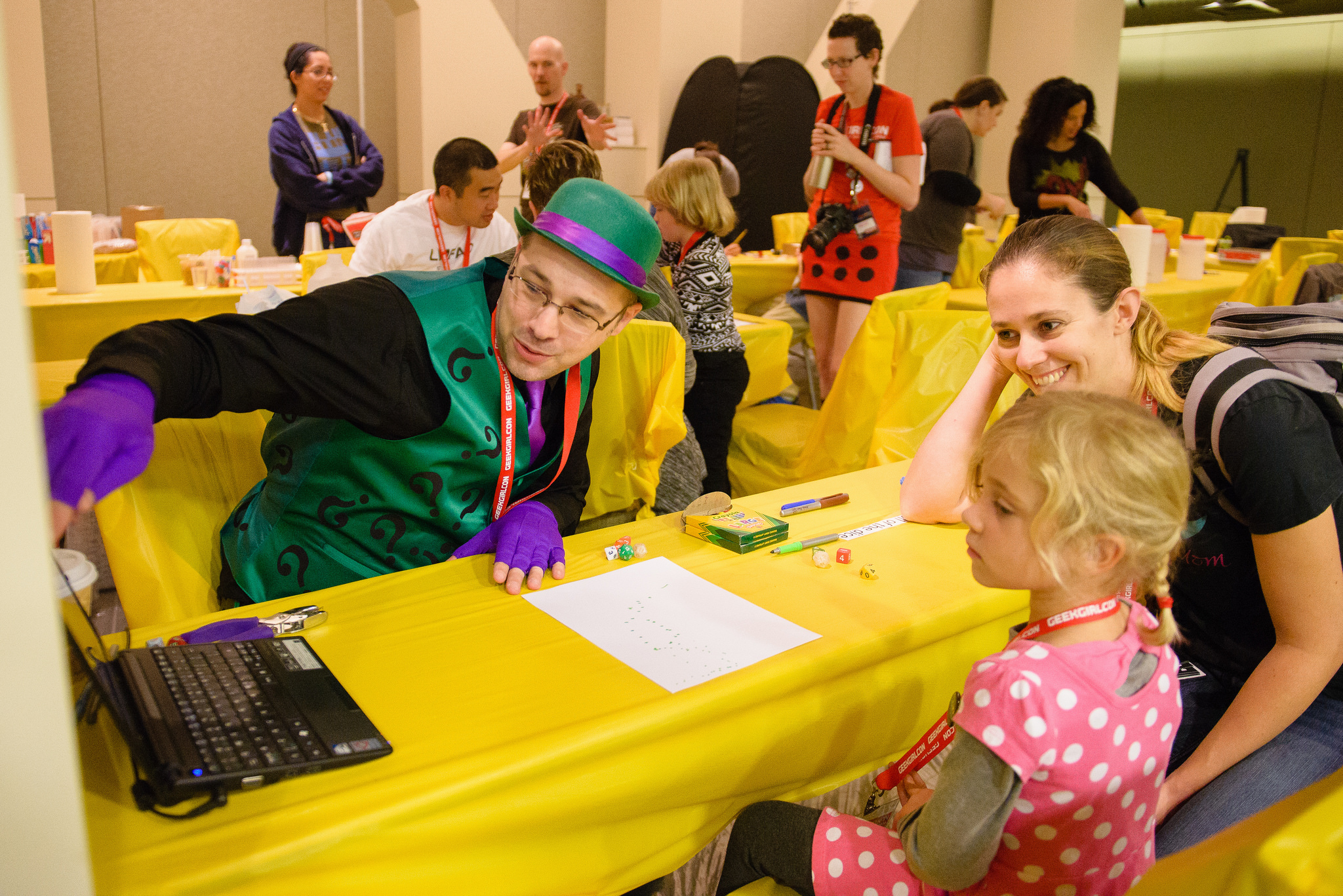 All ages welcome at GeekGirlCon ‘14! 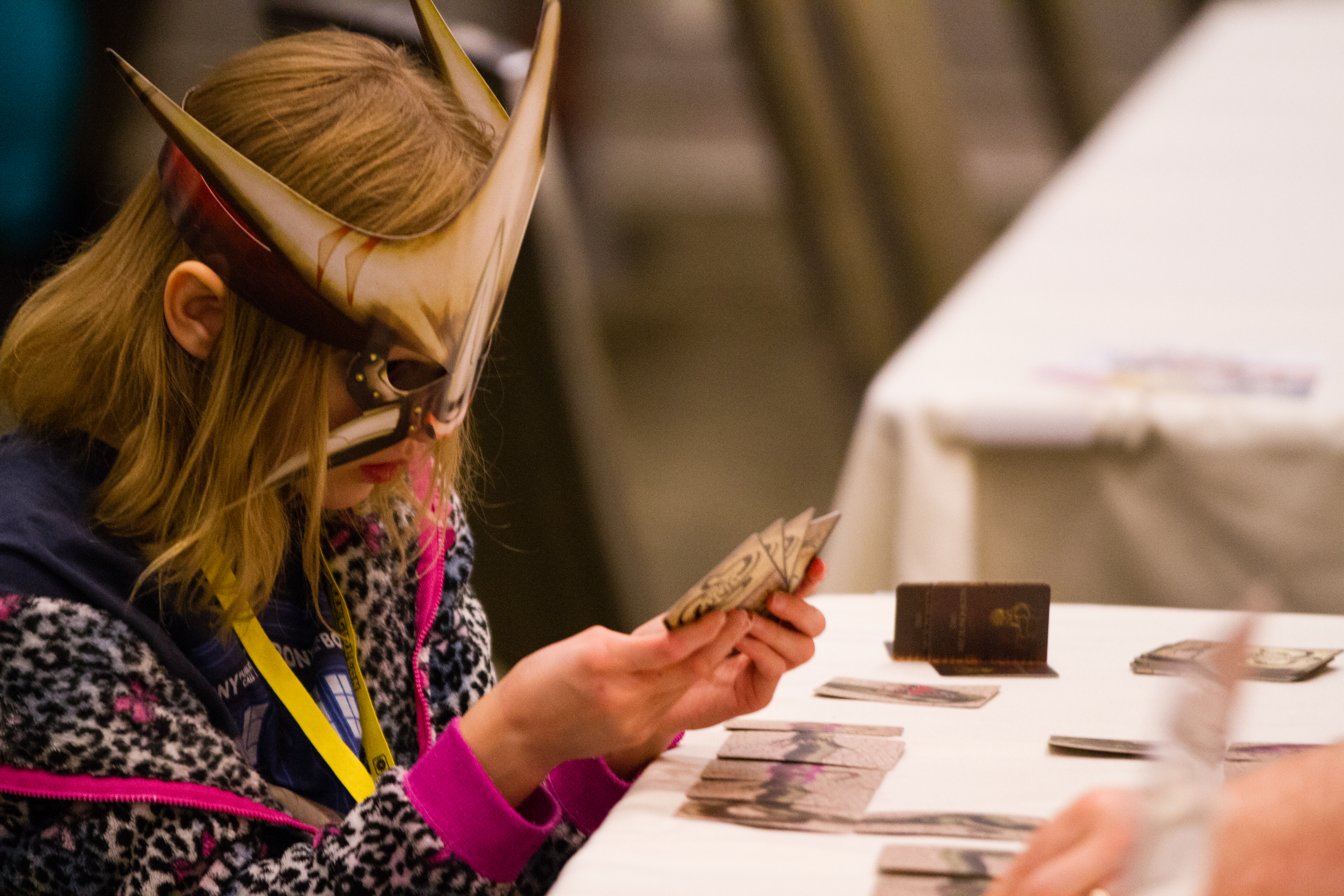 Are you a geeky parent? Do you have a child with geeky interests and tendencies? Then GeekGirlCon ‘14 is the place for your family! GeekGirlCon strives to be family-friendly, starting with the passes. The 12 & under crowd can attend at $10 for the entire weekend; 5 & under are free (but must be registered.) And what is there to do for these geeks-in-training?

The DIY Science Zone has tons of fun in store for kids of all ages! Last year’s science zone was a hit. This year they have a ton of great projects planned.

The gaming floor is ever-popular with kids. With a wide variety of games and game types present, they’ll find something to enjoy. In addition to all the exciting games to try out, there’s a Paint ‘n’ Take miniatures painting session on Saturday morning from 10 am – noon.

“Imaginary Worlds for Kids” happens twice during the weekend! Saturday at 11 and Sunday at 3pm, you can bring your 10 and under to an interactive storytime for families, including a lively author reading, participatory creative and singing games, and a lot of faerie mischief. A seasoned and award‐winning spoken word artist and educator, Danika Dinsmore has performed at hundreds of events, from the Bumbershoot Arts Festival in Seattle, Washington, to the FaerieWorlds International Festival outside Eugene, Oregon. Imaginary Worlds will keep your kids buzzing with inspiration!

Bring your teen to learn all about representation in the books they (and you!) may be reading at “Diversity in Young Adult Fiction.” Representation is vital for people of all races, sexualities, gender identities, and abilities. According to Malinda Lo’s 2013 Diversity in YA website, only 15% of NYT Bestselling YA Books had people of color as main characters, and only 12% of books had LGBTQ main characters. This panel will examine the market today, what readers want versus the disconnect with publishers’ diversity, and what we can do to improve the number of diverse books for teens. We have parent-specific programming, too!

Are you a new mom or a mom-to-be? “Geek Girl Transformation to Geek Mom” is all for you! It goes without saying that everything changes when a baby arrives in your world. But for geek girls turned geek moms, there are some unique changes and challenges in store. Don’t worry—that’s what we’re here for! Join a panel full of geeky moms who know what it’s like to have your life, career, and identity turned joyfully upside down when you add kids to the crazy mix of your life.

Comics, games, and films tend to go the “less is more” route when it comes to representation. Often we only see one character of a racial, gender, or sexual minority. Even worse, some people aren’t represented in media at all. Kids grow up asking, “Where are the characters like me?” At “Why Isn’t Bilbo a Girl? Talking to Kids About Media Representation” you can have a thoughtful discussion regarding how we address this issue with kids—with an emphasis on constructive, positive, and educational answers for the kids who ask.

Lastly, for the parents of cosplayers, or cosplayers themselves who want tips on talking to their family, come to “Cosplay, Parenting, and the Word ‘Appropriate’.” Come discuss cosplay from the perspective of children, teens, and adults who cosplay as individuals and as families. This panel of parents and kids who cosplay will cover a range of topics: How to present cosplay to your parents? How to present cosplay to your kids (and not embarrass them)? How does a parent encourage their teen to express themselves, be body positive, and consider modesty? How do you discuss appropriation vs. appreciation? Deep topics, some advice, lots of discussion!

Most of the panel programming is all ages, so please bring your family to enjoy your favorite topic. And be sure to get your passes now! 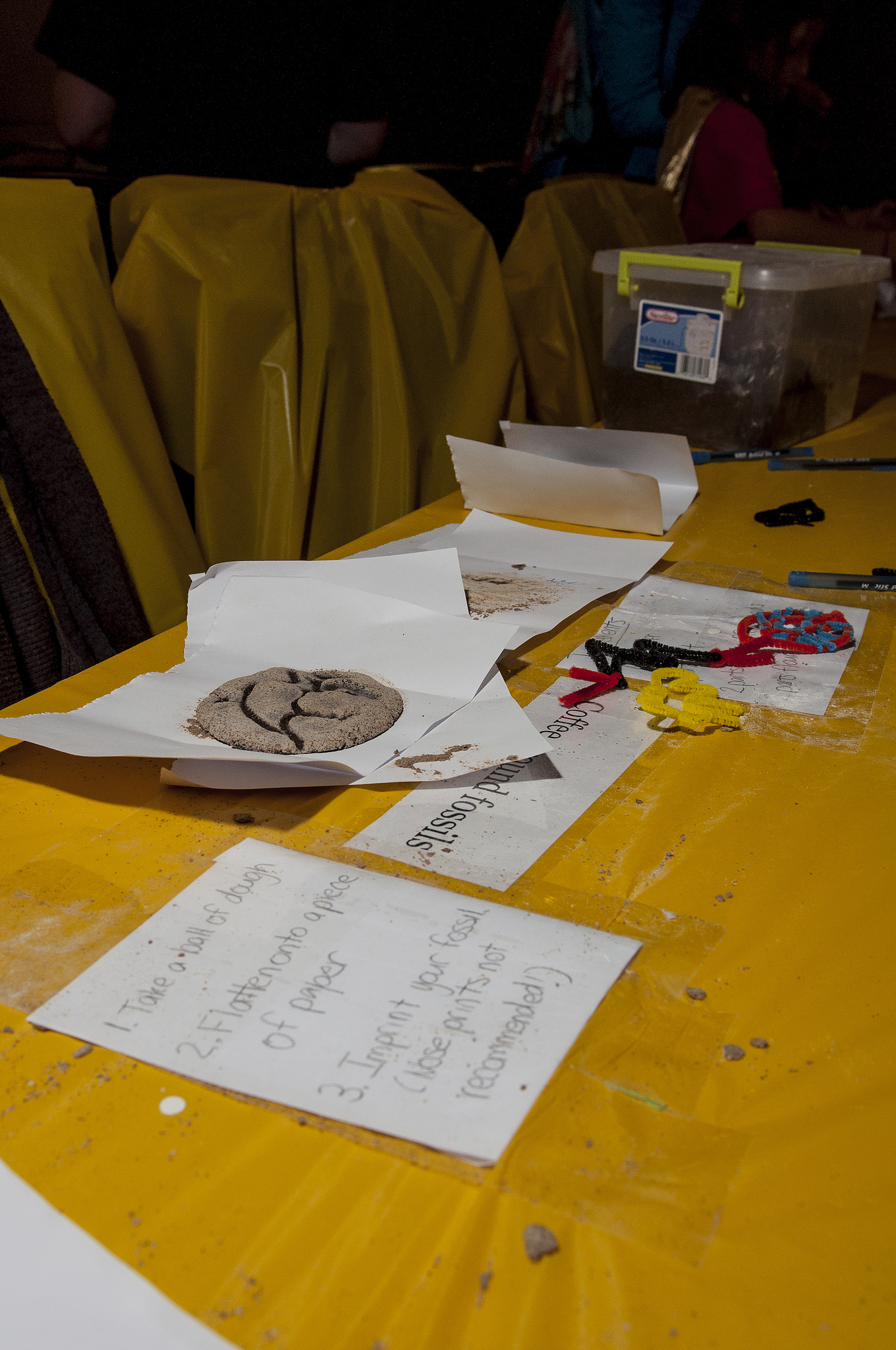