Pets of GeekGirlCon: My Cat Sucks 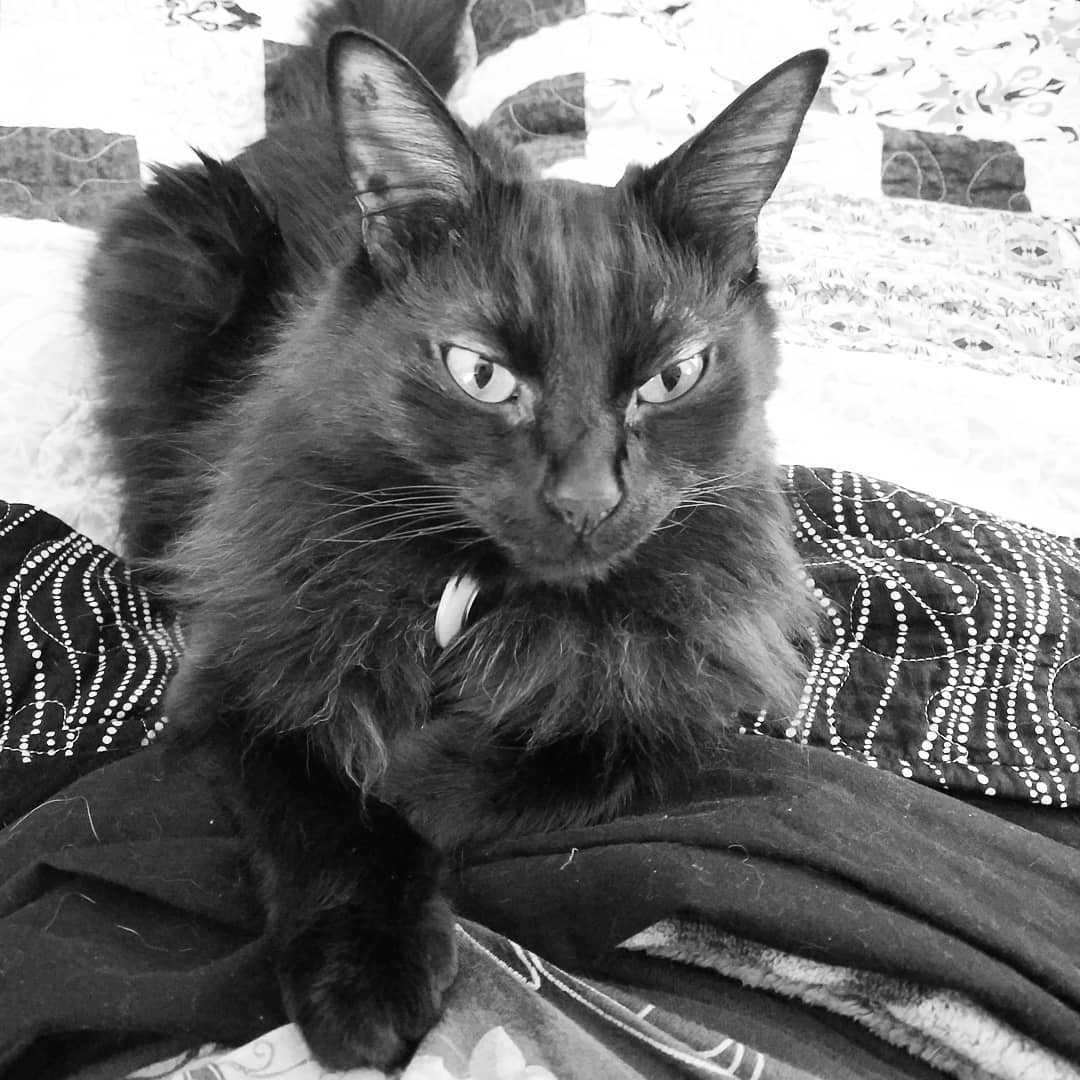 So, I have this cat. If I showed you a picture of him, you might think he is just a long haired black cat, albeit an exceptionally beautiful one, but you would be wrong. A picture isn’t enough to convey the silky softness of his fur with its subtle tones of red that shine in the sunlight and the few stray strands of white on his chest. Nor would it convey to you the depth of his absinthe eyes, dilated with playful excitement. No, a photo would never do him justice.

His name is Loki, but he goes by many other nicknames in our house: Bub, Bublin, Mister Baby, Brother, and many, many others. Loki is the best cat ever! But Loki also has this weird habit—Loki sucks. Loki sucks on shirts, like a baby sucking on a bottle. He has from the minute we brought him home as a kitten.

At first, I was beyond confused by this behavior. I’ve had cats all my life but had never encountered this behavior before. After a few months, I grew worried and did a little research into the matter. What Loki does is called “wool sucking,” even though he almost exclusively chooses my cotton shirts.

There are several reasons why Loki might wool suck. The most likely reason, I found, was that Loki was weaned from his mother too early. This makes a lot of sense. When we adopted him, he was barely eight weeks old. I will always remember the day he joined our little family. It was the middle of July and it was stupid hot outside. We went to a local no-kill shelter in the height of kitten season. This shelter had kittens coming out the wazoo! Everywhere you looked there were dozens of baby cats ranging from 6 weeks to 6 months old. They had so many that they had to put up temporary kennels in the lobby to hold them all. I am a cat lady, so this was my idea of heaven and I wanted to take them all! I had gone into a few rooms to play with some kitties, but none of them felt like they were mine. Then I stepped out into the lobby and I saw him: a black ball of fluff with greenish-yellow eyes in a kennel all alone. I was done. Dazzled by cuteness and the instant cosmic connection, I told my boyfriend that that was the one. The shelter attendant asked if we wanted to play with him a bit to make sure we were a good match. Nope, I didn’t. I was completely certain.

The people at the shelter gave us a temporary cardboard carrier and we put him in it. I left the top open while we did the paperwork, because it seemed mean to shut him in for longer than I needed to. He was so fearless. He kept popping his head out of the box to stare at my boyfriend and me. His shelter name was Jeff… It didn’t suit him at all. Then the shelter lady began to give us a rundown of his (brief) history. Jeff (Loki) had been separated from his mother at four weeks because of a bad upper respiratory infection, which is common in cats. Though he had gotten better, he had been kept in isolation so he didn’t infect other cats. He had only been placed in the kennel for adoption that day.

Can you imagine? This poor, adorable kitten had been taken from his mother before he could even eat solid food. He must have been so scared… sick and alone, with no other cats to comfort him or teach him how to be a cat. This separation and isolation may be a big factor in Loki’s sucky behavior. Not only did he still want to nurse on his mom, but it also provided him a sense of comfort in a new, scary situation.

I may have made a mistake by indulging his behavior. But how could I not? It was the only time I could get him to purr! And, this is going to sound weird, but it was like a bonding time for us. It let us get to know each other. And we needed each other—he needed a home, and I needed a friend. My house was often empty because my boyfriend was spending the majority of his time at work and school. I was also suffering from terrible anxiety at the time and, now I realize, Loki was too. So really, when Loki would suck on the shoulder of my shirt it was comforting to us both. The sucking gave him a new nickname—Oedi-puss.

I took Loki for a checkup at the vet a while later to get some flea meds and vaccines. I mentioned the sucking to the vet, and she assured me that he would eventually grow out of it. He did not grow out of it. It’s been five years and he still sucks all the time.

I can always tell when Loki wants to suck. As is with many males, when a mood overtakes him…he will not be denied. His eyes get very round, until there is almost no green left. His tail gets puffed up and he swishes it back and forth vigorously. He is already purring as he approaches me. This is a special purr—it has a trilling undertone to it that is meant to tell me that he needs attention now. It doesn’t matter to him what I’m doing at the time, it simply can’t be more important than snuggling. He will walk over whatever I have in my lap and hug me. He presses into my chest and nuzzles at me with his velvety muzzle. And then comes the noise. When Loki sucks he is loud! The insistent snuck snuck snuck fills the room and tells everyone what he is doing. His tail whips back and forth as drool spreads over my shoulder and his claws knead my chest and tummy.

For a long time we tried to discourage Loki from sucking. We tried to play with him, we pushed him away, we closed the bedroom at night. But no matter what we tried, and we really consistently tried, he would force his way up to suck. Recently my boyfriend and I decided it was time to give up the fight. So now when Loki wants to suck I let him. It isn’t hurting him to do it, though his claws sometimes hurt me. But I grin and bear it. I will wrap my arms around him and hold him close as his cat spit permeates my clothing. When I get right down to it, it isn’t only soothing for him, but for me too. Loki needs me like nothing else on this planet needs me. Loki may suck, but he is my fur baby.

[Spoiler disclaimer: If you’re not caught up, this post won’t be too spoiler-y, as we just talk about general interpersonal stuff between the characters. We might recommend watching the first episode, though!]

While I’m not (yet) familiar with its source material, I do consider the original Roswell TV series to be an important piece of teen media—not to mention one that I specifically harbor a lot of fondness for. And so, the new CW adaptation, Roswell, New Mexico, is a series I’m both excited about and slightly skeptical of. That being said, I’ve found that this version does have a lot of things going for it. The characters are older by about a decade, the show addresses current social issues directly instead of relying solely on the ambiguous implications of the alien-human metaphor, and the blatant whitewashing of the original cast is being backtracked. In other words, there’s a lot to be hopeful about. If I’m being honest, though, what’s struck me the most about this retelling is what it’s doing in terms of queer representation, and with one of the alien protagonists, Michael, in specific. I won’t argue that it’s the most radical or robust depiction one could imagine, but something about the way they’re writing his bisexuality is affecting me personally and, by extension, shedding light on the way this particular facet of queer representation has been failing us even as popular media is beginning to do a better job of normalizing non-hetero characters and relationships overall.