Level Up in Support of GeekGirlCon Are you a fan of special deals? Looking for a way to support a cause? Interested in combining the two to get discounts and give back?

Do we have a deal for you: our Individual Sponsorship program!

GeekGirlCon continues to look for ways to use our (very) limited budget to provide awesome perks, events, and deals for our fans. This year, we have partnered with an amazing set of Community Business Partners, who have agreed to offer fantastic discounts or deals to anyone who is a GeekGirlCon Individual Sponsor.

We encourage you to level up and become an Individual Sponsor of GeekGirlCon to take advantage of these awesome benefits today. We have a variety of sponsorship levels, from Gold, to Silver, to Platinum — all the way up to Unobtainium!

Individual Sponsors also receive GeekGirlCon merch, discounts at the GeekGirlCon online store, passes at the Platinum and Unobtainium levels, and exclusive benefits at our annual convention! Did you think we were done announcing guests for GeekGirlCon ‘12? We’re not! Today, we are excited to announce the addition of Renae De Liz, an amazing comic book artist. Cover for Anne Rice's Servant of the Bones

Pretty awesome for something that started with a tweet!

In addition to the overwhelming success of Womanthology, Renae De Liz has illustrated the New York Times bestselling graphic novel adaptation of Peter S. Beagle’s The Last Unicorn for IDW, as well as other adaptations including Anne Rice’s Servant of the Bones. She lives in Maine with her husband, sons, and cats.

“We are exceptionally excited to have Renae joining us for GeekGirlCon ‘12,” announced Jennifer K. Stuller, Creative Programming Director for GeekGirlCon. “The overwhelmingly positive reaction and support for the Womanthology Kickstarter project is an indication that there is a great market for comics created by women. We are looking forward to hearing about her experiences creating and managing the project, as well as illustrating great graphic novel adaptations.” Cover for The Last Unicorn designed by Renae De Liz

Read our press release or guest page for more information.

Don’t forget to buy your passes now! And stay tuned for more exciting announcements about what’s happening at GeekGirlCon ‘12!

GeekGirlCon ‘12 will be happening at The Conference Center in downtown Seattle, August 11-12, 2012. Put your ad here at GeekGirlCon 2012.

Geek Girls are here to stay! Place an ad in the GeekGirlCon 2012 program booklet or on our digital displays in the Conference Center and reach thousands of geeky convention attendees looking for businesses, services, and products that support and promote Geek Girls in the sciences and pop culture. GeekGirlCon is committed to growing our Geek Girl community on the web and at our convention.

Update (7/15/12): We are no longer selling ads– but thanks for your interest! Please consider advertising with us for GeekGirlCon ’13.

Our digital display ads go for $50/pair, and they will be displayed for 30 seconds every hour the entire weekend of GeekGirlCon 2012! We also have programming booklet print ads from full page color to just your patron name available. Ranging from $400 to only $10.

Download our ad sell sheet, including order form and pricing.

Place an ad in our program booklet or digital displays today! For more information or to submit your order form, please email Erica.

Ads are first come, first serve, so make sure to get your order in. Ad sell sheet and order form.

As we draw closer to GeekGirlCon 2012 (August 11 and 12, get your passes now!), we will be previewing some of the guests and panelists attending and participating in our weekend festivities. We won’t share all the juicy details, just enough to ensure you HAVE to come to GeekGirlCon 2012. Today, the spotlight is on Teal Sherer, an actress who plays the character Venom in The Guild and who also has her own web series coming out this summer, My Gimpy Life. Teal is going to be participating on a panel during GeekGirlCon 2012 titled “The Last ‘Outsider’ in Popular Culture – Disability,” moderated by Day Al-Mohamed.

More than 1 in 10 Americans live with an apparent disability. But this isn’t reflected in books, comics, films, or television. In fact, did you know that less than 2 percent of TV show characters display a disability, and only 0.5 percent have speaking roles? Day, Teal, and other panelists (including Gail Simone!) will examine the reluctance to include characters with disabilities, as well as some of the common myths, stereotypes, and controversies using examples from popular and geek culture, personal experiences in the industry, and discourse with audience members.

You won’t want to miss this panel, or the great answers Teal shared with GeekGirlCon PR Manager Susie Rantz. Enjoy!

When did you first get involved with acting?
In college at Oglethorpe University in Atlanta. I had to take a theatre class as part of my Communications major and fell madly in love thanks to my amazing professor Troy Dwyer. Troy cast me in my first play Federico García Lorca’s The House of Bernarda Alba. I played one of the daughters, Amelia. Because it was a period piece I had to use an antique wheelchair which was pretty cool.

Already submitted a Exhibitor Contract + payment, and haven’t heard from us? Sit tight, we’ll get back to you within the next couple of weeks to verify the status of your contract. Thanks for your cooperation!

GeekGirlCon is pleased to announce that Jamala Henderson, a Producer at Seattle NPR affiliate KUOW, will be joining the lineup of guests for GeekGirlCon ‘12. Programming Director Jennifer K. Stuller announced the addition of Henderson as a guest: “We are delighted to have a fabulously smart, talented, and geeky woman like Jamala on board as a guest for this year’s con. Expect to see her bring her professional interviewing experience and trademark enthusiasm to the stage when she moderates some of our exciting spotlight sessions!”

Jamala Henderson has been working for KUOW public radio for seven years as an announcer, a reporter, and most recently a producer for a daily afternoon program, KUOW Presents. Henderson has worked at the University of Washington television station, UWTV, and volunteer radio station KBCS. An enthusiastic Geek Girl, she can often be found scouring used bookstores for treasure, making jewelry or candles, and geeking out with mythology and fairy tales. She also has two awesome cats named after her favorite Farscape Characters, Crighton and Jothee.

Don’t forget to buy your passes now! GeekGirlCon ‘12 will be happening at The Conference Center in downtown Seattle, August 11-12, 2012. Prices go up in June! We are excited to announce that Corrinne Yu, one of the Kotaku Top 10 Most Influential Women in Games and Principal Engine Architect for Microsoft’s popular Halo video game, will be appearing as a guest at GeekGirlCon ‘12, happening at The Conference Center in downtown Seattle, August 11-12, 2012. Passes are on sale now!

Corrinne Yu brings fantastic experience in technology and video game programming. Yu currently programs lighting and facial animation, and develops new technology for Halo 4. She is a founding member of Microsoft’s Direct3D Advisory Board and continues to review the designs of new iterations of Direct3D. She has also been interviewed on Tech with Tina for MSDN’s Channel 9.

GeekGirlCon Creative Programming Director Jennifer K. Stuller commented, “We are thrilled to have Corrinne Yu joining as a guest for GeekGirlCon ‘12. She brings a great perspective as a leader in video game programming and technology.” Read our press release or guest page for more information. And stay tuned for even more exciting guest announcements soon!

Don’t forget to buy your passes now! GeekGirlCon ‘12 will be happening at The Conference Center in downtown Seattle, August 11-12, 2012.

Spread the Word about GeekGirlCon in Your Community!

GeekGirlCon needs your help to reach the geeks in your community! Our social media team is full of awesome and reaches a lot of our fans over the interwebs, but those geeks who spend more time at the comic shop, lab, or gaming table than the computer will miss out on all the GeekGirlCon news.

You can help us reach these unplugged geeks by printing this full-color flier and hanging it or handing it out in areas with a high presence of geeks. It’s simple and easy!

1. Print the page in color or black and white on 8.5 x 11 inch white copy paper
2. Trim or cut into quarter sheets.
3. Drop some off in your favorite places in your community. (Please get permission from each establishment before hanging or distributing!)

If you are feeling a bit more ambitious than handing out fliers, contact Jex, our Volunteer Coordinator at volunteer@geekgirlcon.com, about other opportunities to promote GeekGirlCon. 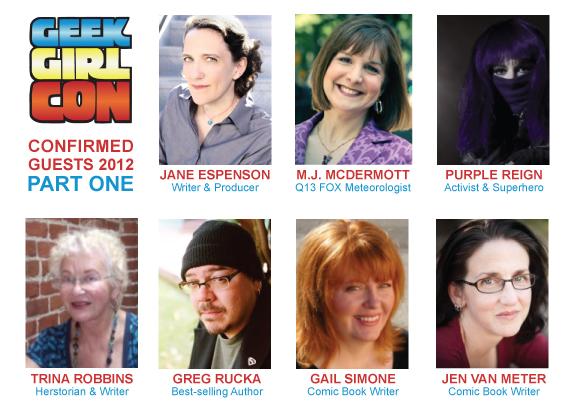 We are happy and excited to announce our first wave of guests for GeekGirlCon ‘12, happening at The Conference Center in downtown Seattle, August 11-12, 2012. Passes are on sale now!

We also have two new guests, both from Seattle: M.J. McDermott (Seattle Meteorologist and Geek Girl) and Purple Reign (Seattle Activist and Superhero). “We are delighted that some of our favorite guests enjoyed GeekGirlCon ‘11 so much that they are returning for 2012,” said Creative Programming Director Jennifer K. Stuller, “and I am excited to bring two fabulous Seattle guests to their first GeekGirlCon!”

Read our press release or guest page for more information. And stay tuned for even more exciting guest announcements soon!

Don’t forget to buy your passes now! GeekGirlCon ‘12 will be happening at The Conference Center in downtown Seattle, August 11-12, 2012.

Bring out your Dice! Or Awesome Ideas! Calling for Tabletop Gaming & Workshops at GeekGirlCon ‘12 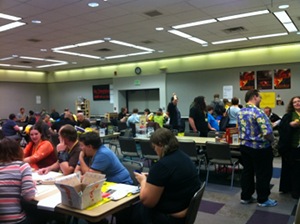 The GeekGirlCon Gaming Department is now taking submissions for tabletop gaming demos and workshops for GeekGirlCon ‘12 on August 11 & 12 at the Conference Center, at 8th & Pike in downtown Seattle. Do you have a great idea for a drop-in workshop or class that you would love to see at the next GeekGirlCon? Would you like to host or lead a workshop or class? Workshops and drop-in classes are great opportunities for fun, quick, and casual interaction. Example workshops include painting miniatures and hero/villain mask-making (back by popular demand).

Bring your imagination and send your workshop ideas and proposals to gaming@geekgirlcon.com. Are you a game publisher, creator, or distributor looking for a great venue and enthusiastic audience to demo your game?  GeekGirlCon ‘12 has an awesome tabletop gaming space for your card, RPG, board, or other games. Tabletop gamers range from new and casual to lifelong and serious players, so all levels of complexity or involvement are welcomed.

Tables are currently available for Saturday or Sunday (or both). Reserve your table(s) soon by contacting gaming@geekgirlcon.com for more information.