Professional Cosplayer? Yes, she is!

GeekGirlCon announces the appearance of Chaka Cumberbatch at GeekGirlCon ‘13 on October 19 and 20, 2013. On February 4, 2013, Cumberbatch authored a piece on XOJane called I’m a black female cosplayer and some people hate it responding to an uproar over her professional cosplay career. In addition to being a professional cosplayer, she is the Associate Brand Manager at FUNimation Entertainment, and a freelance journalist/blogger. Her writing has appeared on numerous sites, including TheMarySue.com and NerdCaliber.com.

Cumberbatch cosplays as various superheroes, in full character, at comic book conventions. Cumberbatch’s cosplay has become such a large focus in the media, she says she expects to never enter a job interview without also discussing her hobby. If you want to talk about back issues and current issues of comics, she is the person to see!

“GeekGirlCon is excited for Chaka Cumberbatch to attend our third annual convention. We look forward to hearing her speak on social, race, gender, and sexuality issues within the geek community and seeing her cosplay,” said Jennifer K. Stuller, Director of Programming and Events. 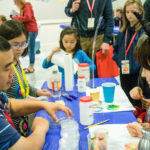