Last year, we introduced the DIY Science Zone to bring real-live science to con attendees young and old, and we need your help bringing it back at GeekGirlCon ‘14!

What is the DIY Science Zone?

The zone is a hands-on, weekend-long extravaganza that makes science accessible to everyone, whether or not they have their own lab goggles at home. It’s open to all ages, and all levels of experience–and all equipment is provided.

At GeekGirlCon ‘13, more than 350 people participated in experiments ranging from making their own neurons, to crime-scene fingerprinting, to dancing raisins.

Once again, we’ll have a line-up of science professionals from a range of different disciplines, many of them returning from last year:

Where do the funds go?

In order to make this drop-in science fun once again available to everyone, we need to raise $6000 to provide travel support for our science superstars to get to the con, as well as for equipment, materials, and prizes.

As if the knowledge that you’re donating to a great cause is not enough, our zone workers will be performing “Acts of Whimsy” at fundraising milestones:

Do your part to help make this happen by donating to GeekGirlCon via PayPal! 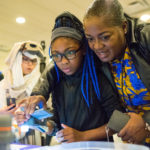 Gallery image with caption: It’s Not too Late to Support the DIY Science Zone!

Gallery image with caption: Join Us for a Pop Culture Trivia Fundraiser This Saturday 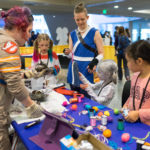