I may be alone in this (though I highly suspect I am not), but one of my favorite parts of attending a convention isn’t even the event itself—it’s the anticipation that builds for months and months beforehand. And, for something as near and dear to my heart as GeekGirlCon, something I know I can count on making time and plans for every year regardless of whatever else is going on in my life, I like to extend the duration of that anticipation period for as long as possible. I like to start preparations for the following year basically as soon as I emotionally recover from the con weekend.

Procuring passes as soon as possible is just one of my pre-con rituals, and I’ve found that it comes with a lot of logistical perks as well. This is no different with GeekGirlCon. Currently, two-day passes for GeekGirlCon ‘17 are 35 dollars and one-day passes are 20 dollars. (I realize I’m biased, but typing this out right now, I can’t help but marvel at what a steal that is.) However, on May 1—that is, 12:01 a.m. on May 1—that is all about to (slightly) change. Our first price increase will leave two-day passes at 45 dollars each and one-day passes at 30 dollars each. Kid passes (ages 6-12) will remain 10 dollars each throughout the increases, and littles (ages 0-5) can attend for free! GeekGirlCon is a family event, people! That is my point. Please bring your kids and your friends’ kids. They are the future and deserve to have things like GeekGirlCon in their lives.

So, if you’re like me and are already making plans for GeekGirlCon ‘17 (and GeekGirlCon ‘18, let’s be real), don’t forget to get your passes before the price increase. You will not regret it, I promise. 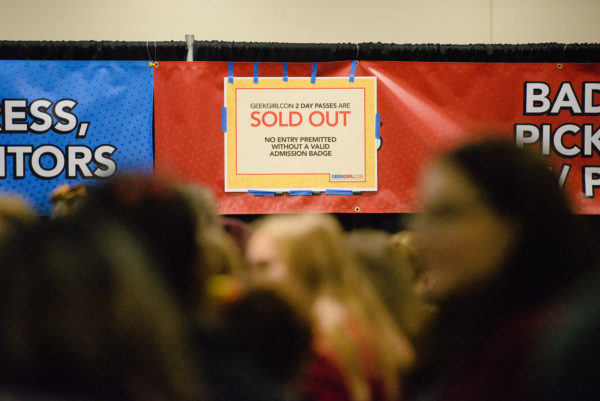 The magical, if bittersweet, moment when two-day passes sold out at GeekGirlCon ’16. Photo by Danny Ngan.

An Update About GeekGirlCon 2020 & Introducing GeekGirlCONLINE

One response to “Early Bird Pricing Ends May 1!”