In the second installment of our Fact or Fiction series, we are tackling Geek Girls and Technology. Today, we’re going to attempt to answer the question: Fact or Fiction: Women use technology as much as men? First, let’s dive into some facts on technology. Tech jobs are predicted to grow at a faster rate than all other job fields. The United States Department of Labor estimates that, by 2018, there will be more than 1.4 million total new computing-related job openings.

Yet, according to the National Center for Women in Information Technology, women won’t fill the majority of these jobs unless significant changes are made.

Additionally, those who do enter the technology field leave at high rates. According to a study by the Center for Work-Life Policy, 56 percent of technical women leave at the “mid-level” career point. This is more than double the quit rate for men. It is also higher than the quit rate for women in science and engineering.

These stats are particularly interesting when compared to the fact that women are the fastest-growing technology market and they rule the social media world.

According to an infographic by DigitalFlashNYC, 56 percent of social media users are women. That’s 81 million women blogging, tweeting, pinning, and posting to Facebook. What could you do with 81 million women? The infographic says you could fill every single sports stadium in the U.S. more than seven times over.

Intel researcher Genevieve Bell recently gave a summary of her tech research at Australia’s Radio National. The Atlantic covered her talk in an article titled, “Sorry, Young Man, You’re Not the Most Important Demographic in Tech.” Here’s part of what Bell revealed:

When you look at internet usage, it turns out women in Western countries use the internet 17 percent more every month than their male counterparts. Women are more likely to be using the mobile phones they own, they spend more time talking on them, they spend more time using location-based services. But they also spend more time sending text messages. Women are the fastest growing and largest users on Skype, and that’s mostly younger women. Women are the fastest category and biggest users on every social networking site with the exception of LinkedIn. Women are the vast majority owners of all internet enabled devices—readers, healthcare devices, GPS—that whole bundle of technology is mostly owned by women.

It is not just younger generations of women who are contributing to this rise. Look at the rise and power of mommy bloggers. About 3.9 million moms in the United States identify as bloggers, and BlogHer, the largest community of women who blog, receives 40 million unique visitors per month. Check out this infographic posted on Mashable for more facts on mommy bloggers.

The Atlantic article goes on to ask, given this information, why do tech marketers continue to target men? One big reason is the lack of women at major venture capital firms, startups, electronics makers, and Internet companies. For example, Twitter just hired its latest batch of interns, and a photo from Twitter Co-founder Jack Dorsey reveals there was not a single woman in the crew.

But there are signs of progress. Facebook recently named its first woman, Sheryl Sandberg, to its board. A new organization, Girls Who Code, just started a program for 20 high-school-age girls, who will learn how to build websites and mobile apps and start their own companies.

And there are local organizations like IGNITE, GeekGirlCon, and Washington STEM—organizations working to bring girls together and empower them to be technology leaders.

You’ll see many women who are currently leaders in technology at our convention. From panels on the latest technology in medicine, to effective podcasting and video-blog techniques, or how you create a great user experience (UX) on your website, convention guests will be able to explore their role in technology.

Interested in pursuing a tech career? Come to GeekGirlCon ‘12 and explore our GeekGirlConnections room, where you’ll be able to network and interact with women who work in technology fields. Or stop into Lisa Phillips’ panel on Sunday to learn about the “Tech Jobs You Never Knew You Wanted.” (Get your passes here, and stay tuned to our website for our full programming.)

So, do women use technology as much as men? The answer: it’s complicated. Women do use technology tools more often, but still don’t fill the majority of bachelor’s degrees or technology roles at major companies.

What’s your favorite way to use technology—is it on social media, programming, building databases, etc.? Let us know in the comments! 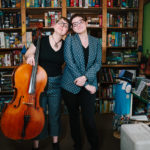 Happy Birthday, Nobody Hates You: A Q&A with The Doubleclicks

3 responses to “Fact or Fiction: Geek Girls and Technology”