What was your involvement with the March for Science?
Since I have done a lot of science outreach in the community (as well as campus) and I do so through the lens of inclusion I was asked to join the planning committee for the March for Science Bellingham.  In the end, there were four of us.  All women, one person of color (me) and two scientists.
How much planning was required for the March? Did you encounter any challenges?
There was so much planning.  One woman had experience planning big community events like these and knew just what to do to get a permit from the city, talk to police, work with a local business to help us with donations and paying bills.  There were so many bills.  Porta potty bill, traffic control bills, table and stage rental bills, flyers, T-shirts to sell, etc.  I didn’t have to deal with much of that.  My job was networking:  I helped them team up with businesses and organizations I have worked with in the past.  I helped them find speakers for the march that would energize the crowd.  The other scientist had a great idea to have local businesses have science themed food, events and beer the week leading up to the march.  She did a lot to organize that and it went really well.  I hosted a trivia night related to that.  I also organized the science fair that followed the march.  There were almost 20 STEM college clubs, businesses and organizations.  I had help from a event planner for the fair and how to organize all the demos and tables.

The other planning and challenge was social media.  We had around 2,700 people join the Facebook group.  Managing what was posted, accepting people and then when the day came figuring out how to live stream was challenging.  We wanted to have two live streams, including one that had a clear view of the ASL interpreter. 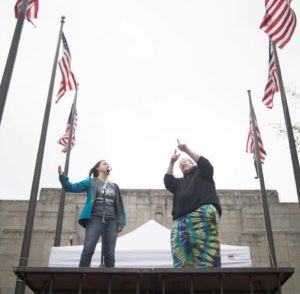 One of the organizers, Melissa, speaking at the event.

Why is the March for Science important? What were you trying to achieve?
Some feel Science is under attack.  With the current political climate there has been talk of objective reality when it comes to science policy and that goes against evidence based findings.  We want the public, the current administration and fellow scientists to know that people support the scientific method.
How did you feel on the day of the March? Were there any last minute changes, issues, miracles, or revelations?
I was very conflicted the day before the march and while we were setting up before people started arriving.  I have read so much about the resistance in other satellite marches about not hearing people of color and their concerns about including language about equity and representation in science.  I even have people I know and love that still don’t really understand why I am so passionate about including this messaging in the march.  They say that science is completely objective and “this identity” stuff is distracting.  Bellingham is 85% white and although it is known to be progressive, there is a lot of bias when it comes to race that is not acknowledged or spoken about.
However, I actually didn’t feel any of this resistance in our planning.  I suggested one of the main speakers be from Northwest Indian College because they have a bachelor’s degree in Native Environmental Science.  I wanted to show that there is science being done by people that are not the stereotype.  Everyone was on board but the voices, articles and imagery from other marches kept seeping into my mind.  I kept thinking, I am out here as a scientist, supporting science and fighting for our voices to be heard but if I needed my white colleagues to do the same when I needed my voice to be heard as a women of color in science, would they have my back.
At the event I felt calm and happiness.  I saw the crowds and they were more diverse than I would have expected for a march for science in Bellingham.  People embraced the speaker from Northwest Indian College.  They shushed the lone Trump supporter when he made comments during her speech. The crowd cheered whenever inclusion was mentioned. Maybe this crowd would have my back.  I found connections between all the speakers and had a moment of solidarity during the event.
The March for Science attracted some criticism (for its lack of diversity, people being unclear as to how it would affect policy, etc.). What are your thoughts on this?
I understand the criticism and that the notion of success at our march can be seen or experienced in a totally different way from someone else. 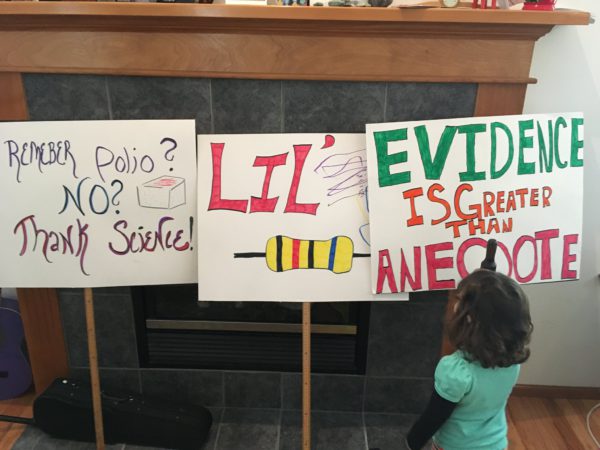 What was the turnout for the March for Science? What sorts of people were at the March? (Parents/kids, academics, etc.?)The Police estimated 2000 people came out to the Bellingham March.  There were lots of science faculty, STEM students, families and kids, older community members and only one trump supporter.  There were also a lot of people dressed up. A few T-Rexes, older women seagulls and superheroes. (Here is a link to the data on the turnout for larger marches).
What was the atmosphere like at the March?
It was crazy windy and raining but everyone was super upbeat.  The signs were amazing!
What do you hope was the message that the March sent? How did you feel at its conclusion?
I hope the message was that Science is used and needed by everyone on the planet Earth.  I hope that the march brought people towards that conclusion instead of alienating people further from science.  I hope it humanized scientists.
You can also listen to Regina’s podcast talking about the March for Science below.