Okay, so, I’ve always been staunchly in favor of romance novels as a great and deeply (misogynistically) undervalued genre. That being said, I actually haven’t ever really been their biggest fan myself. As an adult, I’ve been working to develop a genuine interest in the genre, which has been fun, but also a little hit-or-miss if I’m being honest. To sum up the years-long experiment, I tend to enjoy them, but I find them very hard to connect seriously with—I can almost never see myself in the characters or the relationships that they’re in. And to clarify, this is highly abnormal, considering my favorite genre is YA, and I’m highly prone to complaints about less-than-satisfying romantic subplots. I genuinely did not understand why I was having such a hard time loving romance novels the way I wished I could until I read RWRB and finally recognized a truth that, in retrospect, seems very obvious, but still needed this particular book to push it into focus. Basically, I’m queer and therefore am not going to identify with straight relationship dynamics the way I will with queer ones. It makes perfect sense, but being a cis woman who is attracted to men, among other genders, I was operating under the assumption I would find something to connect to in traditional, hetero romance novels. RWRB, which is about two young men (fictional versions of a United States’s president’s son and a prince of the British royal family, respectively) falling for each other, has reminded me of such an important facet of queerness, especially the way I experience it: Queer relationships are queer not only because the participants are not opposite in terms of rigid, binary understandings of bodies and gender, but because the relationship dynamic that they build and enact is also itself queer. I truly think that RWRB is an example of this concept being played out so well within some of the fun genre conventions that make romance novels so familiar, and since reading it, I’m newly energized and hopeful about the genre and where it’s going.

Yes! For me, there was such an immediate recognition of both the main characters and their relationships to queerness. Although he’s confined by his royal status and by his family’s homophobia, Henry is so secure in his identity—he knows he’s queer, without question. Alex, meanwhile, is just discovering his queerness, allowing his new relationship to draw previous experiences and feelings into the light, confirming what he both knew and didn’t. I identified so strongly with both perspectives. And I loved that both Alex and Henry’s queerness isn’t confined to their relationship alone. The romance of the romance novel extends to the strength of their friendships with June, Nora, Pez, and Zara. They way they fluidly connect with each other— teasing each other and flirting with each other, loving each other individually and collectively—felt so queer to me and made the world feel even more heightened—an escapist queer fantasy, through and through. But I’m also so curious about your thoughts on The Kiss Quotient. As a hetero romance novel, why did this book still work for us, where others haven’t?

I’ve been thinking about this a lot because I’m currently coming down from the RWRB high by reading another contemporary, critically well-received hetero romance novel and, wow, are my suspicions about not being able to identify with straight relationship dynamics being confirmed in the process. So, there has to be something about TKQ that sets it apart considering I remember reading it and distinctly feeling like I finally understood what attracted people to romance so viscerally. My current working theory is that because the protagonist’s interest in getting into a relationship (TKQ is a Fake Boyfriend story, for reference) is rooted in her own experience with Autism, there are emotional elements beyond Feeling Straight for me (or anyone) to relate to. While navigating the oppressive weight of heteronormativity is often a powerful unifying force among femmes who are attracted to men, the older I get (and the gayer I feel), the less I’m able to get swept up in a story about a positive emotional experience of that. It was refreshing and deeply engaging to read about a woman who prioritizes self-awareness and self-care in a realistic way, and then also works to fit her developing relationship into that practice versus fitting bits and pieces of that practice into a relationship. I don’t know how clearly I’m articulating this, but Hanna, is this kind of how you would describe the way the book subverts the hetero romance novel model?

Yes, that’s completely it for me too. As much as I hate the critique of romance novels that they’re too centered on the romance/relationship, in the case of hetero romances, I’m realizing that I tend to agree. At least when the focus on the romance is to the detriment of other aspects of the characters’ lives/personalities/relationships/etc. Throughout TKQ, I felt so strongly that Stella’s relationship with Michael only made her more herself – more confident, more sure of her passions, more driven and kind, more secure, and more able to see herself as a well-rounded and fully capable human being. There is also the element of invitation; she actively chose to seek out Michael’s help as an escort, proactively set parameters for their relationship, and pursued him romantically. This level of agency is such a key factor in my ability to go all in with a romance novel, and books like TKQ and RWRB make me even more optimistic for the future of self-aware, ultra queer, fun, and fully human romances.

Now, we’d like to hear from you! What romance novels (or other media) have been working for you lately? We’ll be on Twitter chatting with y’all, so hit us up there at @hupptwothree and @TealChristensen. And while you’re there, follow RWRB author @casey_mcquiston because her book tour/Pride tweets have been golden. Talk to you then! 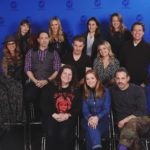 Pride, Queerness, and Being a Geek: Thoughts from GeekGirlCon Staffers

One response to “#GeekGirlTalk: Subverting Heteronormativity in Romance Novels”