Welcome to Geek Girl Talk, a (biased, subjective, opinionated) conversation about the pop culture we’re currently loving, hating, and obsessing over. This month, we’re talking about Charmed, the CW reboot of the late-90s to early 2000s original. Charmed comes back for its second season on October 11, and we need to chat about everything Maggie, Mel, and Macy in preparation!

Spoiler disclaimer: We do get into some spoilers below! If you haven’t watched season one of Charmed/don’t want to be spoiled, then what are you waiting for? Watch the whole season in one sitting (totally doable) and then come back and talk to us about it!

I should probably get this out of the way right at the top: I love the original Charmed. In elementary school, my sister and I were so obsessed that we begged our mom practically every day to take us to the movie store (yes, we are what you’d call Elder Millenials) and get every single season of the show on DVD. I shed actual tears over (spoiler alert!) Prue’s death. I yearned to live in a Painted Lady house with my sister/all my friends, where we would have morning check ins about the people we were dating (who we would never be closer to than we were to each other, of course) before jetting off to our various jobs. I dreamed of having a wardrobe that consisted of 100% crop tops and shiny leather pants. In short, I was trash for Charmed.

Having said that, I somehow feel completely able to separate the new Charmed from the old, which I truly feel is a testament to the reboot’s actors and creators. Of course, enough elements of the original are in place to act as nostalgic scaffolding—the spooky-cozy sister house, the mother they all miss, the Power of Three—but the rest feels fresh to me.

I couldn’t be happier that each of the sisters are women of color and that we finally get some canon queer representation (though I would argue that the way that the show’s queer relationships unfold hasn’t always been the most effective). I have…mixed feelings about the Cole stand-in, Parker (as you know, Teal!). Both the dialogue and the magic are just as corny as ever (which I happen to sort of love), and I didn’t fall in love with the show as quickly or thoroughly as I did with the original, but overall I was impressed with how effectively the reboot created a slightly darker, more complicated yet still reliably silly atmosphere that is both completely itself and completely Charmed.

I have a few concerns going into this second season, though, not least of which is the fact (which I just learned!) that there will be two new showrunners who want to “lean harder into its supernatural storylines and less into the family dynamic.” (NO!)

Teal, what do you think of the show, and what are your fears/hopes for season two?

You’ve laid out the fears I had going in pretty thoroughly also being a huge fan of the original series myself. My main concern then and going forward is whether or not this version will bring something new and substantial and relevant to the world or not. I think you’re right in your conclusion that it has, and my main hope for season two is that that continues rather than ends here.

There’s a lot I have to say about Mel’s queerness and Macy’s virginity and Maggie’s actual perfection, but overall, I think one of the main triumphs of the show is that it consistently avoids the villainization of witchcraft or femininity (or any intersection thereof). While obviously there are depictions of witchcraft in our media that range from not-oppressive to empowering to radical, there’s also a resurgence of depicting witches as morally ambiguous and/or aligned with a Christian conceptualization of evil. (Yes, I’m specifically referencing Sabrina right now, but my point stands generally also!) Not only is this trend appropriative, but it’s also falls firmly into the category of Forever 21 Feminism, which is to say shallow and performative.

I think there are a few things that keep this revival from falling into that pattern. First, the fact that the governing body of witches, the Elders, is comprised fully of femme practioners is important. Additionally, the primary organization of rogue witches, the Sarcana, is also comprised mostly (if not entirely) of femmes. This leads to a more ambiguous representation of good and evil for the sisters to engage with that doesn’t rely on gendered power dynamics or our culturally ubiquitous understanding of Christianity. I feel like this shift made it so the show could deal with the complexities of issues like control and transparency and community-sourced ethics in a more real way than some of its counterparts. I don’t know if that’s the vibe everyone was getting, though. What do you think, Hanna?

This is spot on for me—both in terms of how the new series remains true to the heart of the original and how it transcends the current trend of problematic and reductive depictions of Christianized witchcraft that you mentioned. (Oh Sabrina, how many hours we could spend venting about you…) At the same time, I am curious how the magic system of Charmed (which combines threads of Brujería, Santería, and Celtic paganism) has been received by actual practitioners of these traditions. Witchcraft as a subject is particularly tricky because it’s almost always either a) oversimplified, b) mischaracterized, c) villainized, d) appropriated, or e) all of the above. Especially in fantasy-driven media like Charmed, how can witchcraft be represented in a way that is respectful and accurate while emphasizing the modern day, real-world context of these traditions? Not a question that I am remotely qualified to answer, but something I’ve been thinking about as we see more and more depictions of modern witchcraft in media.

Where the show succeeds for me is in the nuance it allows (most) of its characters precisely because, like you said, it does a good enough job of subverting heteropatriarchal power structures and dualistic depictions of good and evil. Simultaneously, I’m impressed that the show manages to avoid conflating abuse and mistreatment with nuance and complexity. For example, Parker as a love interest succeeds (for me at least) in certain areas where his original series counterpart, Cole, failed: Parker quickly disavows his dark side, consistently demonstrates his genuine support for Maggie and her sisters, and, above all, doesn’t become the literal Source of All Evil. Of course his character is far, far from perfect (he is, after all, a frat boy), but I think it bodes well that the series is at least trying to subvert the is-he-the-man-of-my-dreams-or-is-he-just-an-actual-demon trope.

Okay, I’m fervently agreeing with everything you said about being careful of how we engage with witch media that is disconnected from the history and ongoing existence of the traditions it references and also moving swiftly on to my thoughts about Parker. Here’s my thing about men and demons: When we lump all of the toxicity of masculinity into a demon that’s possessing a man (or some other iteration of that), I’ve noticed that we almost absolve the man himself. While in some ways using the culturally transcendent concept of demons to discuss the ways masculinity harms individuals, communities, and society at large seems useful in theory, I’m wary of using it to separate the “bad things” from the actual person who’s enacting them. In terms of using stories to understand our real world and lives, I think this leads to a mindset of thinking of Toxic Masculinity as being this thing no one can feasibly dismantle verus it being a complicated system of cultural norms that we’re all simultaneously victims and perpetrators of. In other words, if it’s the demon doing it, then the man (or other person) isn’t themselves responsible for the harm they cause.

Parker, rather than being possessed by a demon, was born half demon. (This is also true of Cole in the original series, but that character’s relationship with his demon side is so messed up I can’t even get into it.) As the first season progresses, we’re taken along a b plot of Parker grappling with the reality of his demon side and all of the power, family dynamics, and obligation to “evil” it entails. We also see him (and his human mother) working to subdue it and retain a clear sense of his humanity. As Hanna mentioned, Parker’s characterization isn’t perfect or even particularly robust, but I do think we’re set up to continue seeing him take responsibility for his demonic actions as well as actively work against those impulses. It may be wishful thinking, but I’m sort of excited about what this example might mean for depictions of masculinity in similar stories going forward.

I think we’ll end here for now, hopefully looping back to cover queer representation and sisterhood dynamics and all of that once we see what’s in store for season two.

As always, we’re most excited to hear what y’all thought about the reboot! Meet us on Twitter (@HuppTwoThree and @TealChristensen) to share what thought about this first installment of the series and what else you’re excited to see! 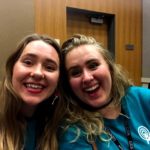