To start, why do you support GeekGirlCon? Why would you encourage others to give as well?

I support the organizations and events that I needed as a child and teen that didn’t yet exist. As a geeky transwoman in Seattle, the most personally important organizations for me are GeekGirlCon and Gender Justice League/Transpride.

You mentioned that GeekGirlCon fulfills some of what you missed as a child/teen. What elements of GeekGirlCon stand out in that respect?

The hole in my childhood was exposure to the sheer variety of people, races, cultures, genders, sexualities, fandoms, modes of expression, etc. GeekGirlCon’s hands-on science programs are actually a lot like some of what I had as a kid, both in the Skagit Valley and in Seattle. But unlike back in the ’80s, the guests, guides, panelists, and attendees aren’t of the cis white male monoculture I would run into at robotics, programming, and science events. Without that exposure to a variety of role models, it was hard to reconcile the apparent dissonance between who I felt I was and what interested me. Internalized sexism can rip a girl apart, doubly so when she’s terrified that the world won’t believe she even is a girl.

In the time that you’ve been supporting GeekGirlCon, what sorts of developments have you seen that have made you excited about the future of the con?

The biggest advancement has been the support of and centering of women of color.

Favorite memory from a past con?

It’s kind of a tie between meeting and talking with Erica Luttrell and the long chain of amazing panels at GeekGirlCon ’15, including (but very much not limited to) the Women in Gaming panel, the Sense8 panel, and the Matriarchy in Mad Max panel. 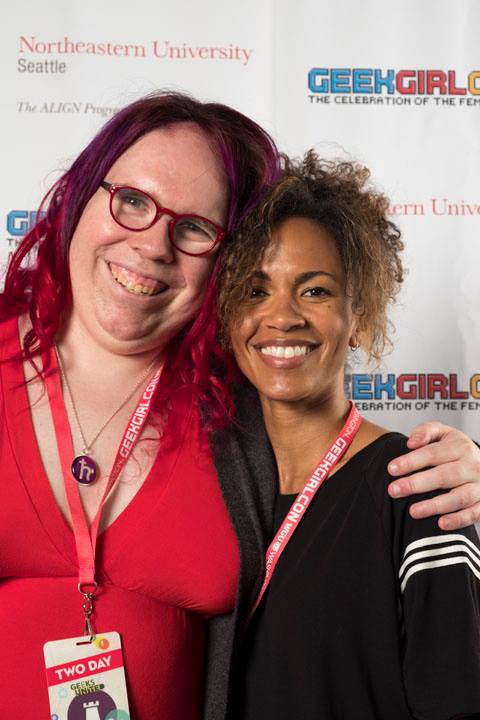 [Image Description: Stevie and Erica hugging for a picture during a past GeekGirlCon.] Source: GeekGirlCon

Is there any particular reason why you like to participate in GiveBIG (versus other fundraising campaigns)?

I like to participate in campaigns with matching funds. I already have a moderately high multiplier just from my tax bracket, so stacking matching funds on top of that to increase the leverage? Pure awesome.

Is there anything about the larger GeekGirlCon community that you particularly like?

The community, the people, and the support they provide each other.

How do the other orgs you’re involved with compare to GeekGirlCon in these respects?

Gender Justice League and Transpride provide many of the same examples, from the other side: successful genderqueer people, proof that we can survive and thrive, and a community of mutual support. I look forward to future panels at GeekGirlCon with panelists from GJL, and Trans lifeline (the Sense8 panel really was amazing!).

Stevie is just one example of our beloved individual donor base—which we’re always looking to grow! If you’re able, please consider supporting GeekGirlCon this year during GiveBIG and remember: We truly could not do it without you!