Hey, Staffer, Whatcha Geekin’ Out About? An Interview with Andrew Chan 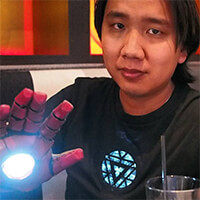 Here’s one last Hey, Staffer interview for the year. Meet Andrew Chan! Andrew is our merchandise assistant but also spends a lot of time dabbling with cool technology, fighting with lightsabers, and watching his favorite scifi shows! We ask him about what it’s like to be a Trekkie, technobabble, and the lengths he will go to for a good geek convention.

I’m Andrew and I help Shubz run the merchandise department. This includes climbing through stacks of boxes in storage to count our inventory, ordering new stuff, processing online orders (and getting the online store running), and helping set up and run the merch booth during the con. I’ve also taken over as an interim sysadmin running the internal infrastructure.

I’ve worked at Amazon and Microsoft as a software engineer and a technical product manager. Currently I’m messing around with different projects and road tripping around the country for no reason.

I lived in a bubble of geeky friends growing up, so I always thought other people were weird for not being geeky.

Right now, I’ve got my hands on a refurbished server, so I’ve been busy getting it running a KVM with docker containers and VM instances with PCI-e passthrough to build the ultimate Plex and multi-headed gaming machine. Previously, I was tinkering around with using VRidge to stream a Google Cardboard to SteamVR to make a super cheap VR system. I also built a karaoke machine using a mixer, microphones, a Chromecast, and whatever was behind my friend’s TV.

Haha what? You’re outgeeking me with your technical language!

Basically, it’s like having my own data center in my closet that can stream games and movies. I also get to experiment with VR using just my phone and a few dollars to get it connected to my computer.

I’m also part of Jet City Saber Guild, a local lightsaber choreography group that does stage shows for charity. We use metal sabers with heavy duty polycarbonate blades so the actors can physically clash against each other during the shows. There’s a fun bonus of having several lightsabers around the living room. 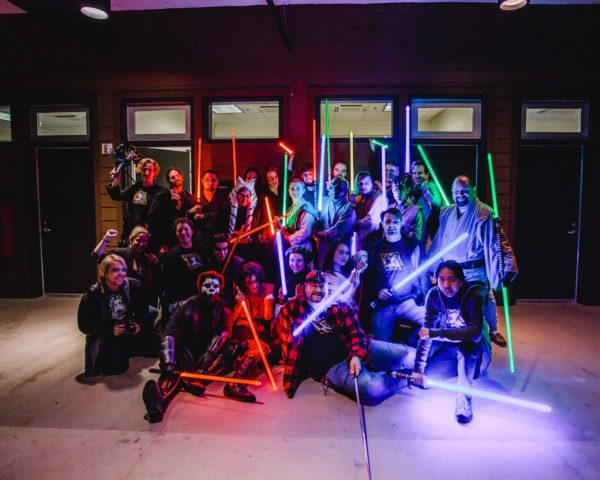 I also try to attend or staff every anime, comic book, or gaming convention along the west coast. I’ve worked at PAX, San Diego Comic Con, Fanime, Anime Expo, Emerald City Comic Con, Sakura-con, and Norwescon to name a few. I got really good at driving long distances and take meandering sightseeing road trips to get there. For example, I detoured through Montana coming back to Seattle from San Diego Comic Con this year.

What are you currently geeking out about?

Why is Star Trek Discovery awesome?

I grew up as a trekkie, so new Star Trek is always awesome. Discovery and The Expanse are especially fascinating because of the progressive representation of gender, race, and social issues that speculative fiction is known for exploring. They’re quickly becoming my favorites, along with Black Mirror and The Handmaid’s Tale.

Why do you think representation of race and gender is getting more attention these days in pop culture?

I have noticed many aspects that factor into why diverse representation matters in pop culture, but the one that resonates the most with me is breaking down rather than reinforcing stereotypes. The tropes that cause the most cringing eye-rolling from me are when a token minority appears in a story doing token minority things. I’ve felt like an outsider and never really identified with Asian male characters growing up because I wasn’t great at math, didn’t know any kung fu, and spoke English without an accent. It becomes a self-reinforcing stereotype when people are portrayed as behaving in a certain way in media and grow up thinking they’re supposed to be like that. Our current generation seems to be breaking out from this mold and using our childhood experiences to change the rhetoric of how stories are written. Get Out is a fantastic example of this.

Who do you think would be interested in Star Trek (I mean, who wouldn’t be)?

Anyone who likes daydreaming about exploring space, thinking about how things could be different, world building, and omgphaserspewpewpew.

What other things are you interested in/do you do in your spare time?

Photography. Shopping. Shopping for photography. I ran a game jam in November. If there’s a silly idea or project, I’m probably trying to be involved in it. 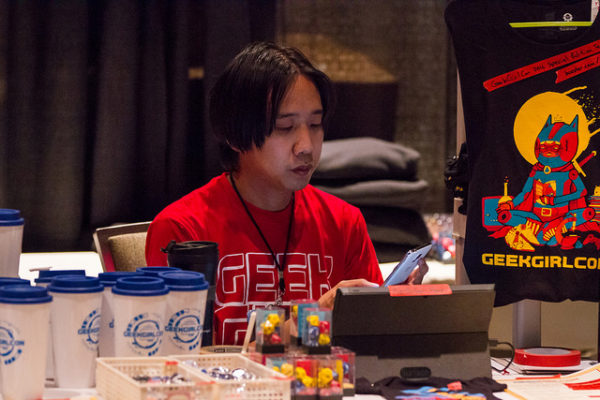 How did you get involved with GeekGirlCon?

Another PAX Enforcer ran the volunteering department for GeekGirlCon in 2013 and asked for help. I’ve been volunteering or staffing ever since. I signed up for the Merchandise department because of my aforementioned love of shopping and stuff.

Watching the convention come together. There’s a lot of moving parts and a lot of people donating their time and expertise towards putting on a great event for our attendees. Being able to work with such dedicated and talented people makes me proud to be a part of GeekGirlCon.