Hey Staffer! Whatcha Geekin’ Out About? An Interview with Kathryn Storm 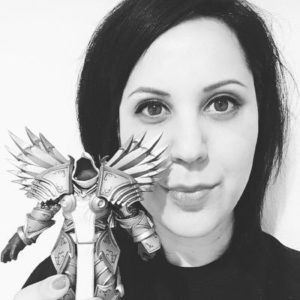 [Image description: a black and white picture of Kathryn looking at the camera and holding a figurine.]

Here is our latest installment of Hey Staffer! This month, we’re talking to Kathryn Storm, who runs all the video gaming events at GeekGirlCon. Kathryn has been with the organization for several years and geeks out over tech, cosplay, and of course, video games! Read on to find out more and to get a sneak peek of what we have in store for GeekGirlCon ’18!

Hi! I’m Kathryn and I’m the Video Game Coordinator. I organize Console Free Play and experiment with our video game content for the con. Last year we tried out Tournaments and Let’s Plays in our schedule.

What do you do for your day job, when you’re not being awesome as a GGC staffer?

By day, I’m an interaction designer at Xbox where I’m currently working on Mixer.

Can you elaborate a bit on what that entails?

It’s a lot of collaboration with everyone involved with the product. Asking questions like, what do the people who use Mixer want and how can we design for that? Thinking through how someone goes about a task and enabling them to achieve their goals. And Mixer is special because it’s also independent from Xbox. It’s a really unique design space.

I guess so! I’ve been a computer fan for a very, very long time. 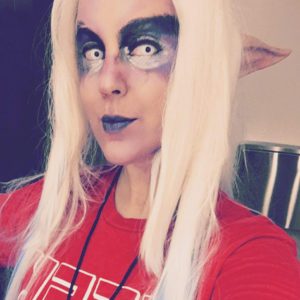 [Image description: Kathryn with blonde hair and silver eye makeup cosplaying as her World of Warcraft character at GeekGirlCon 16.]

What sort of (geeky) things do you like to do in your spare time?

My sister and I have been into cosplaying together over the last few years. My favorite cosplay so far has been when we did Buffy and Evil Willow at GeekGirlCon a few years ago. And as of the last year or so, my husband and I have been playing a lot of World of Warcraft together. We are definitely an RPG family.

What are you currently geeking out about? Why is it awesome?

If I had to pick, it would be Monster Hunter World. I really enjoyed the last Monster Hunter, Generations for the DS. I love that it’s become accessible to so many people by being on more platforms. People I never thought would play are talking about it. Which means more friends for multiplayer, of course.

Who would you recommend the Monster Hunter franchise to?

Anyone who likes badass weapons and monsters! I’m very much a fan of games with weapons that are absurdly large.

Okay, let’s talk about the org. How did you get involved with GeekGirlCon?

I heard about GeekGirlCon when I was living in San Francisco around 2011. I was looking for a women’s gaming group. In my search, GeekGirlCon was that and more. When I moved to Seattle for work, I already knew I wanted to be part of the staff. I volunteered at the con my first year and talked to a few staffers to get to know the people who were part of the team. Everyone was great, I was sold.

Definitely the convention. You see the impact of the work you’ve put in all year. It’s great to be a part of something positive, something you truly believe in. We approach our work with passion but also, that we’re always learning. 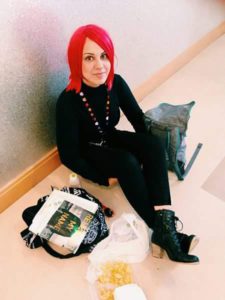 [Image description: Kathryn sitting on the floor, dressed as Sydney Bristow from the TV show Alias.]

What were your thoughts on GeekGirlCon ‘17? Did you have a favorite moment?

Having the Let’s Plays and Tournaments. I remember being so excited about the idea and not knowing if we could pull it all off!

So Let’s Play was a new segment for GGC ‘17. Tell me about how it came into existence, and why you decided to hold it.

For two reasons. Looking at the gaming space, Let’s Plays are pretty common. The GeekGirlCon demographic is really hands-on and I wanted to see how they would feel about Let’s Plays. The other side of it was wanting to collaborate with other departments and their content. I felt like we weren’t leveraging each other’s efforts as much as we could have been. Last year, early on I heard about a few featured contributors from the gaming space. My first thought was cross-programming. One thing the staff talks about is how we need to cross-promote programming, especially since we have amazing content.

How was it for planning and preparing the event? (Is it coming back for GGC ‘18?)

I put together the Let’s Play proposal and pared it down to a few bullet points. Contributors would choose a platform, a format, have representatives, bring their game and show up. The formats were really fun. We had everything from panels alongside a showcase of gameplay to Q&A with voice talent over versus play. 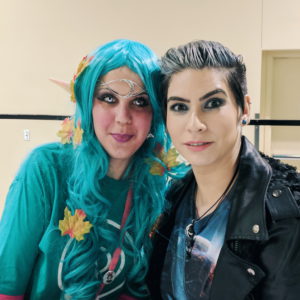 [Image description: Kathryn, wearing a green wig and silver contact lenses, cosplays as Tyrande Whisperwind as she stands next to voice actress Fryda Wolff, who is wearing a black leather jacket.]

It was so much fun and everyone was fantastic to work with. I learned a lot and have some fun stuff planned for GGC’18!

What growth will allow us to do. We’ve already seen exciting things happen from expanding space-wise. And that’s just a small part of what expanding means.

Do you have anything else you want readers to know about GeekGirlCon (either about the org or the event)?

Definitely check out all the content in the schedule. You might be surprised by something that is outside your fandom or interest. I went to a women in horror panel on a whim a few years ago with a friend. It actually got me into watching American Horror Story, which is a great show. We are working on better cross-programming but also, take a peek too. Trust me on this one!