Hello, readers! Who else is recovering from Emerald City Comicon? What a weekend!

However, if you’re like us, you’re probably already hungry for some more geeky activities. Check out these great March events in the Seattle area. There are TONS of them! 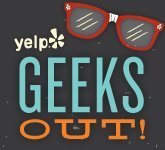 *Yelp Geeks Out Event*
Thursday, March 7: Explore the new MOHAI with Yelp for FREE! (10 A.M. – 8 P.M.)
From the website: “The brand-spankin’ new Museum Of History And Industry is open. And better yet, it’s FREE every first Thursday of the month. So what better way to kick off Yelp Geeks Out than by meeting up together to take a free tour of this incredible new space?!”

Friday, March 8: Super Gaymer Party for the Launch of Gaming in Color! at Raygun Lounge
This is the Seattle launch party for a new documentary called “Gaming in Color”, celebrating diversity and LGBT contributions in gaming.

Saturday, March 9: Game Design/Development Collaboration hosted by Seattle Games Cooperative
Gathering up designers, developers, programmers, artists, etc., to collaborate on creating a full length playable game on any engine (based on preference such as a Unity, UDK, classic engines, etc.) within 8 hours.

Saturday, March 9:Second Saturday SciFi Cinema
From the website: “Continuing our long tradition of geeky movies at Wayward, join us for “Teenagers from Outer Space”, hosted by SciFiCommons. There will be MOVIE TRIVIA and PRIZES during intermission! No cover; 9-11pm.”

Monday, March 11: Pub Quiz Fundraiser for Relay for Life! at The Blue Star
Geeks Who Drink will be teaming up with Relay For Life at the UW and the American Cancer Society for a special fundraiser event. There will be a cover charge of $5 per person to participate in this pub quiz. From this money, $5 per team (approx. $75 total) will be given to the winning team, with the remaining proceeds donated to cancer research.

*Yelp Geeks Out Event*
Wednesday, March 13: Adult Nerf Wars @ The Tag Zone in Des Moines
From the event page: “This incredible event space is offering the Yelp community FREE admission to come play some Nerf wars, hang out with friends and get some complimentary food and drinks while you’re at it. Limited to just 60 people only, make sure you RSVP.”

*Yelp Geeks Out Event*
Friday, March 15: Cheers, Beer Geeks! A FREE Local Beer Sampling Event at Downtown Spirits
The final details of event are still in the works. Stay tuned to their website for more info!

Saturday, March 16: Ink-Stained Amazons and Cinematic Warriors: Superwomen in Modern Mythology
From the event site: “In this lively multimedia presentation, pop-culture historian Jennifer K. Stuller will help us explore how the female hero in modern mythology has broken through the boys’ club barrier of tradition. Using comics, television and film, we will discuss female action and super heroines from the 1930s to the present day. Do social and political forces affect pop culture – and vice versa? This conversation will examine women’s representations in media and women’s roles as media makers, inspiring us to think deeper about popular culture, media, gender images and storytelling.”

*Yelp Geeks Out Event*
Tuesday, March 19: A Pinball Tournament at Full Tilt Ice Cream
From the event page: “We’re hosting a fun FREE pinball tournament at the Ballard Full Tilt location. We’ll be selecting a machine and whoever gets the highest score at the end of the evening wins a super chilly, super COOL surprise!”

*Yelp Geeks Out Event*
Thursday, March 21: A Cheezburger Tour
From the event page: “Join up for a meet-and-greet with the Cheezburger team. After checking out the office, spend your night playing Settlers of Catan, Cards Against Humanity and Foosball (and so much MOAR) with the Cheezburger crew and fellow Yelpers. Show yourself as the ultimate champion of all things games!”

Saturday, March 23: Vixy & Tony with Sunny Larsen and Betsy Tinney
From the website: “Our favorite filk performers are back at Wayward this Spring for a shiny evening of fun, friends, and geek-inspired live music. No cover; please note earlier start time, 7-10pm.”

Saturday, March 23: Intermediate Puppetry Class with Vox Fabuli’s Rachel Jackson
From the invite: “You know how to make your puppet talk, but what does she sound like? You can make him move, but where is he going? And how does he get there? In this fun, intermediate puppeteering class, you’ll learn the basics of characterization – voice, physicality and emotion – and how to apply them to your puppet. You’ll get tons of tips for making character choices and see what a big impact they can have on your puppet’s performance.” NOTE: This is a class about puppet operation, not puppet construction. Register at Brown Paper Tickets.

Monday, March 25 – Saturday, March 30: APRIL Festival and Small Press Book Expo
From the website: “APRIL’s mission is to connect readers with independent literature and the authors and publishers of this relevant and vitalizing work. The Small Press Book Expo is one of APRIL’s cornerstone events. On March 30, tons of small presses and journals from around the country will pack the ground floor of Richard Hugo House for a day of eye-opening indie lit shopping.”

*Yelp Geeks Out Event*
Thursday, March 28: A FREE Moving Screening at Northwest Film Forum
From the event page: “Limited to 110 guests, be among the first of your friends to RSVP for a FREE screening of The T.A.M.I Show. Called one of the “top three rock movies” ever made by Quentin Tarantino, this movie will have you singing in your seat!” Thursday, March 28 – Sunday, March 31: Norwescon 36
From the website: “Norwescon is the Pacific Northwest’s Premiere Science Fiction and Fantasy Convention and one of the largest regional Science Fiction and Fantasy conventions in the United States. Whether you’re looking for writer’s workshops, costuming tips, artistic creativity, musical concerts, or filmmaking experience, you’ll find it here!” Friday, March 29 – Sunday, March 31: Sakura-Con 2013
From the website: “Sakura-Con is the oldest and most well attended anime convention in the Pacific Northwest.” Check out the list of great events, programming, guests, and exhibitors at their website!

*Yelp Geeks Out Event*
Friday, March 29: A Board Game Bonanza at Raygun Lounge
From the event page: “Settlers of Catan, Carcassonne, Agricola, Puerto Rico, Munchkin, Ticket to Ride, Arkham Horror and more … Come check them out from Raygun’s library of more than 60 games, pick some peeps to play with, sample some locally brewed Blue Dog Mead and have a blast!”

*Yelp Geeks Out Event*
Saturday, March 30: Nerdy Dancing: A Glow-in-the-Dark Dance Party!
From the event page: “Taking place at Q on Capitol Hill. You and up to TWO guests are invited, BUT you must be 21 or older (with ID) AND have received an email confirmation to attend this event. There will be a guest list at the door. So if you want in, RSVP with a Yelp account!”

Saturday, March 30: Hello, The Future
From the website: “We’re very excited to welcome Hello, The Future all the way from California for her first performance at Wayward. Hello, The Future is participating in NorWesCon and will be performing at Wayward during the con weekend. Fabulous geek-inspired satirical and fun filk music. No cover; 8-10pm.”

Saturday, March 30: Tabletop Day!
From the website: “On March 30th, 2013 , we ask you to go to your friendly local game store, neighborhood coffee shop, school auditorium, community center, or host a game day at your home and play more games.”

WOW! That’s a lot of geekery for one month.

Which events do you plan to attend?

And please let us know if we missed any!

8 responses to “March Geek About Town”