On Saturday, October 11, I presented the Double X Science Notable Women in Science series at GeekGirlCon ‘14. Thanks to everyone who were able to attend GeekGirlCon and attended the panel! There were around 50 people attending, despite stiff competition.

I prepared about 25 women to cover at GeekGirlCon, and managed to get through about 16. Some of these women I’ve covered on the blog and some were new.

I invited members of the audience to come up and speak on women they wanted.Vera Rubin and Marie Curie were the two brought up. 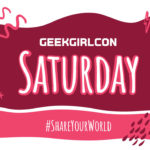