As some of you already know, I’ve been a Star Wars fan for as long as I can remember. I had been eagerly awaiting the GGC’17 Looking for Leia panel since I first read about it while helping edit the con’s program booklet. The panel highlighted filmmaker Annalise Ophelian’s six-episode docu-series Looking for Leia about women of the Star Wars fandom. The panelists included Annalise herself, along with droid-builder Christina Cato, Rebel Legion member Pat M. Yulo, physician and starwars.com writer Linda Hansen-Raj, fanfiction author and cosplayer Maggie Nowakowska, and KUOW reporter Jamala Henderson. 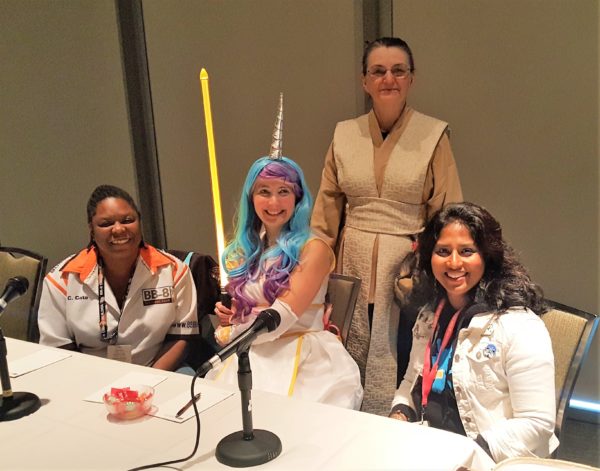 Source: me. Description: Panelists Christina Cato, Pat M. Yulo, Linda Hansen-Raj, and Maggie Nowakowska pose together for a photo. Christina, Pat, and Maggie are all dressed in Star Wars cosplays.

The panelists, all of whom are featured in the film, began by introducing themselves and sharing when and how they first encountered Star Wars. Christina, Linda, and Maggie said they’ve been fans since A New Hope premiered in 1977. For Pat, her love of the Star Wars universe began on September 12, 1992, when her dad brought the series home on LaserDisc and she saw it for the first time. Annalise said Star Wars was her first fandom; she saw the films at age four and then dressed up as Princess Leia that halloween.

Jamala said she found Star Wars several times throughout her life, beginning when she was eight years old and was so in love with The Empire Strikes Back that she coerced her grandmother into taking her to see the film four times in theaters. When Jamala tried to vie for a fifth showing, her grandma gave her the soundtrack instead, saying, “replay it in your mind.” Jamala drifted away from the series for a while, before she discovered the novel Star Wars: Heir to the Empire in 1992 and rekindled her love of the fandom. She began reading ‘zines and found one with a letter in it from Maggie asking Star Wars fans to write to her. Jamala did, beginning what is now a 20-year-long friendship between the two. 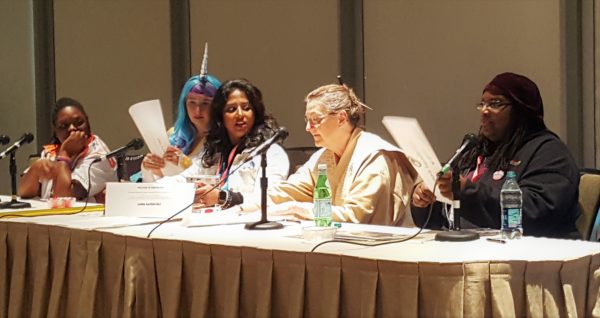 Source: me. Description: Panelists Christina Cato, Pat M. Yulo, Linda Hansen-Raj, Maggie Nowakowska, and Jamala Henderson sitting at the panel table and chatting as they prepare for the panel.

Annalise then gave some background on what prompted her to make the documentary. She said that, when she went to the fan festival Star Wars Celebration for the first time, she felt as though she was showing up fully and being seen fully to a degree that surpassed even her experience coming out as queer. She connected with many other women Star Wars fans at the event and saw the impact that women were having on the fandom. After the 2016 election, she wanted to do something joyous and decided on the documentary. Originally, she had hoped to get enough material that Carrie Fisher would be willing to be interviewed, as well, and when Carrie died, Annalise felt as though the documentary had died with her. Her partner, however, told Annalise that she needed to keep going, and Annalise ultimately agreed.

Looking for Leia crew members then dimmed the lights and started up a sneak-peek of the docu-series. The clips were filled with a common theme—women talking about fandom being an intersectional space where they were safe to love what they loved without being judged for it. The interviewees spoke about how, not only have women always been part of the Star Wars fandom, they were the ones who both built it and have kept it going.

After the sneak-peek, Christina talked about her experience as a droid-builder, sharing that she was one of only five women droid-builder attendees of Celebration. While she was there, someone asked her where her husband was and who had built her droid for her. She said that all women droid-builders have experienced sexism and mansplaining from the droid-building community.

Source: Giphy. Description: a gif of Princess Leia rolling her eyes in A New Hope.

However, Christina also spoke about the courage she’s found through droid-building. She doesn’t have an engineering background and she didn’t own any power tools before she began to build droids. For her, droid-building revealed the expansiveness of her abilities; “If I can do this—if I can wire and not electrocute myself,” Christina said, “I can do [other things], too.”

Maggie shared that the Star Wars fandom began in an era where many women didn’t handle a checkbook or drive. Putting together ‘zines, she said, helped them discover their abilities and see that they were more capable than they may have been led to believe while growing up.

Source: Giphy. Description: a gif of Princess Leia grinning proudly at the end of A New Hope.

Jamala agreed, adding that talking with Maggie as a young person showed her how loving something gives people the courage to pursue their passions in new and different ways. For her, this included going to grad school for a Masters of Communications and Digital Media so she could tell stories of her own.

When asked what the best and most challenging aspects of the Star Wars fandom are, Pat shared that her fandom experience has always been women-centric. She went to an all-girls Catholic school, connected with women in college, and became interested in her boyfriend because he could talk Star Wars on her level. Christina said that men have told her they don’t know any other women who like Star Wars like she does, to which she responds, “Um, yes, you do.” Fandom, Linda added, helps women grow as they discover the support of the community. She said she goes to cons and does things she wouldn’t normally because of fandom.

Surce: Giphy. Description: A gif of Carrie Fisher describing Leia, saying, “She can do anything she wants; she’s very powerful, she’s witty.”

Annalise closed by answering the question of whether there is anything fandom universally rejects. She explained that fandom stands in opposition to oppression, and that it’s becoming more vocal in its rebellion against oppression.

I’ll admit that this was the panel that made me cry this year. Hearing about the impact women have had on the Star Wars fandom—how they laid the groundwork for fanfiction, cosplay, and the fan communities we have today—and, likewise, how the fandom has given so many women a place to belong, spoke to my own experiences in the Star Wars community. The Looking for Leia series is still in the works and doesn’t have a release date quite yet, but given what we saw and heard in the panel, it’s going to be one impactful documentary. So keep an eye on the twitter feed for updates, and be sure to stock up on the tissues before it premieres.

Source: Giphy. Description: a gif of Leia and Rey hugging in The Force Awakens. 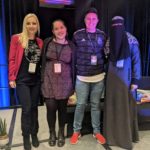