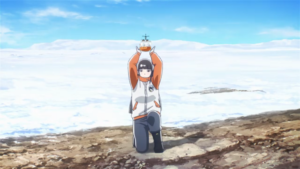 Don’t let Shirase’s stoic looks deceive you. By the end of the series you’ll see her laugh, cry, and tell off anyone who messes with her friends. Screenshot from Crunchyroll.

Antarctica isn’t just a cool place to go for Shirase—she also wants to find out what happened to her mother three years ago during an civilian Antarctic expedition. For that to happen, Shirase works countless part-time jobs to amass 1 million yen for her journey. I can’t imagine my teen self even thinking a trip to Antarctica was a possibility! Yet Shirase doesn’t let anything get in the way from her goal, even when classmates start teasing her of her obsession with Antarctica. 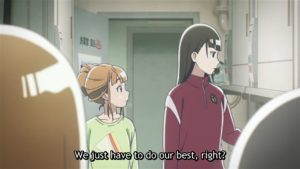 Shirase motivating her friends after a hard day of work. Screenshot from Crunchyroll.

Any hardship Shirase faced before the trip grows exponentially once the journey to Antarctica begins. All four girls have to cook, clean, physically train, and endure the harsh environment of the Antarctic Circle. They also all know, at least subconsciously, that they will have to deal with the inevitable truth that Shirase’s mother died on the last expedition. There are minor squabbles and misunderstandings, but Shirase’s strength and leadership qualities keep the group together through the tough times. It’s cathartic when Shirase steps onto the Antarctic ice and yells “IN YOUR FACE!” to the sky, and the rest of the crew joins her.

In the last episode, we see Shirase after accepting her mother’s death. Ready to move forward in life, she cuts her long hair just above her shoulders, both a homage to her mother and signaling a fresh start. At the farewell party, Shirase confidently announces that she’ll be back to Antarctica. She also gives her mother’s laptop, the item that made her confront the truth about her mother, to an expedition member who is still grieving. This was a whole new mature Shirase from the first episode. Her motivations have changed, from chasing the past to looking forward. She wasn’t going to come back to Antarctica because of her mother, but because she wanted to come back. 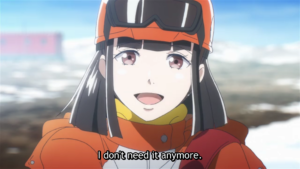 Make sure you have a box of tissues handy for this scene! Screenshot from Crunchyroll.

I thoroughly enjoyed watching A Place Further than the Universe. There was high quality animation, well thought out characters, and no creepy fan service! Above all else, Shirase Kobuchizawa’s growth throughout the expedition gave an emotional depth to the series that I haven’t seen for a while. Shirase reminded me that sometimes, strength comes from acceptance.

Kalyna is a copywriter at GeekGirlCon, and a professional Jill-of-all-trades.