Stitching Together A Community: The GeekGirlCon 2017 Fashion Show

I spent a solid hour in front of the mirror this morning, preparing for the first day of GeekGirlCon 2017. My outfit was already laid out on my hotel bed, and I sat peppy-eyed and ready in front of the mirror, a splay as makeup scattered about. A morning ritual I do often, but something about getting ready to spend the day covering panels, live tweeting, and flat out expressing my geekdom made it all the more special. I mean heck, it was the first day of GeekGirlCon 2017! 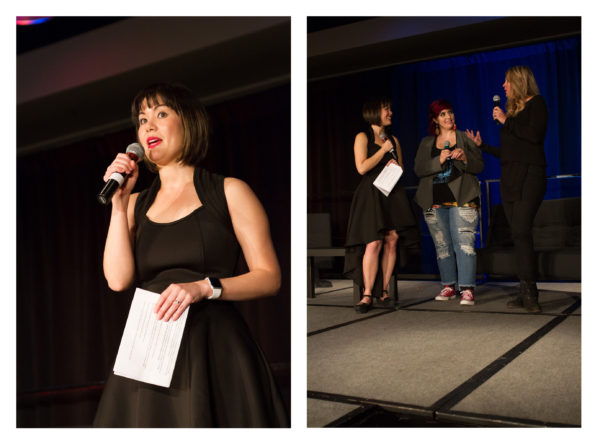 When I’m not reading my daily dose of YA fantasy, spending hours regretting my latest playthrough of The Witcher 3’s ending, or rewatching the entire Lord of the Rings trilogy, makeup plays a major role in my geeky life—all of fashion does, really. Dressing down or dressing up, fashion is just as important to me as a good book or a good game. My (functional, yet decidedly trendy) vestment of choice is a super villain-esque pair of running pants that pass for “real” pants, paired with a leather jacket—just like I waltzed out of the Slytherin common room. I adorn a subtle, but graphically appealing nerdy tee, add a full face of makeup and I’m good to go.

This year we brought back the GeekGirlCon Fashion Show. Tonight, the main stage was lit up with body-positivity, a collection of proud, geeky designers and models—and a surprisingly robust playlist of modern music covers (but like, super geeky covers, I’d never heard “Talk Nerdy To Me” before). 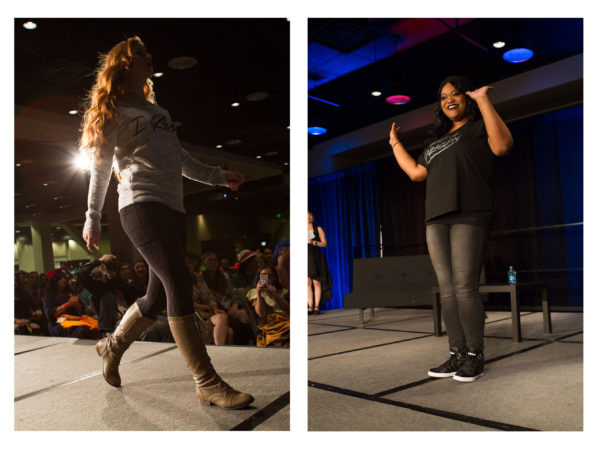 Hosted by Sophy Wong, a designer, maker, and costumer herself, she opened the show with a question: what does it mean to be represented and reflected in fashion, as geeks? Simply put, visibility. Wearing your fandom (quite literally) on your sleeve is showcasing your community. It shows that there are others out there like us, who share our interests. It shows those who are not necessarily apart of our fandoms what we are interested in—it reflects a piece of ourselves. Geek fashion is an ever changing field, and every year more and more designers bring new looks for us to better express our geeky side. Whether casual, a little more daring, and maybe even a bit feminine with some frill, there are so many ways we tell the world “Hey, I love Daenerys—and you should too.”

This year, five designers brought their creations to the stage:

Geeky, convertible dresses are what Little Petal is all about. Ward started her brand as an alternative wedding dress company, but after she was asked to design a Wonder Woman dress for a friend, she was inspired to create an entire collection based on recognizable characters. The dresses on stage looked, first and foremost, comfortable—and the color schemes just screamed which characters they represented…even if the Jedi dress had a bit more of a modern silhouette. 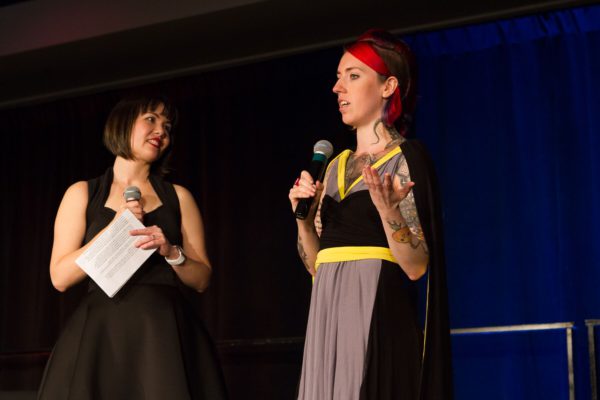 What truly sets Little Petal apart is that Ward only makes custom dresses—she does not size her work. Her designs are based on the character that is portrays, not body shape, she explained. It is important to not only represent all women, but persons, all bodies, and therefore each dress is custom made to the customer’s individual measurements. We are not simply sized, and she does not style a dress with a shape in mind. No two women in the audience would perfectly fit into the same dress, so why try to make them?

Haute Geek was realized by sister team Chunni and Candice—who make adorably feminine skirts. They work on the designs together, from the initial sketch to digitalization. They come from a very creative family, and always wanted to start something together. For the longest time they both loved fashion, but also wanted to create clothing for bodies like theirs. Haute Geek’s skirts are complementary, that come in a-line and lolita cuts. The fandoms that are portrayed are ones that Chunni and Candice also love, so that they can best create the design. 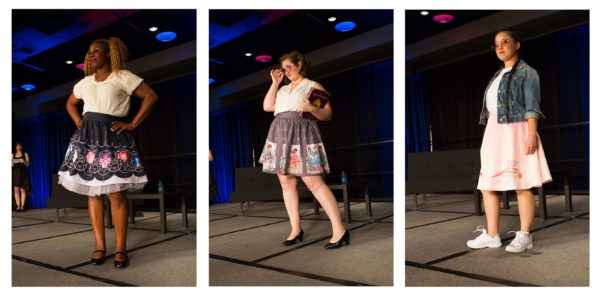 Having geek fashion helps build on community, they explained to Sophy and the audience. If someone is wearing a skirt from your fandom, you immediately know that they have something in common with you. You already have the grounds to start conversation, and therefore have the foundation to make a connection.

Jordan just didn’t think there was enough geek fashion, it’s plain and simple. Based out of Brooklyn, Jordandené is located near the heart of the fashion industry—where you make it or break (and she and her brand do the former, for sure). Because Brooklyn is expensive, they work out of a small space and therefore produce small product and graphic tees and tanks. 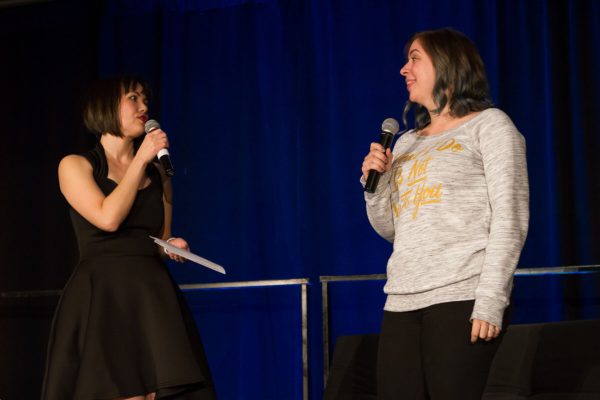 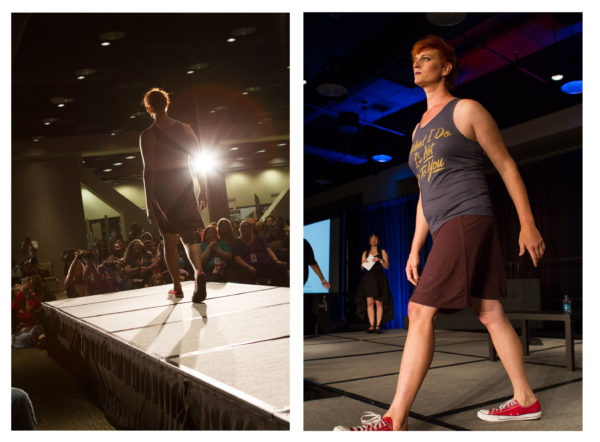 She likes to pick messages (whether positive, girl power…) that you or someone may relate to, based on a fandom—even if you haven’t seen the show, played the game, or read the book that it references. Her husband does the lettering by hand (recognize the Taco Bell Live Más campaign?) and production goes from there. Far more simple, even reserved, Jordan’s designs are empowering in a way that the non-geeks can even relate. By no means does simplicity mean subtlety, however, “Be A Dragon” reads loud and clear.

Catherine Elhoffer, the founder and creative force behind Elhoffer Designs, decided to start making her own clothing after getting laid off—it was a sign, she thought, to just start doing it herself. She’d been criticized for her concepts while working in the fashion industry, and thankfully she knew better than to take those criticisms seriously, because what she brought to the stage was simply beautiful. Elhoffer designs higher end, well made pieces. From gowns to tunics, she mixes modern fashion with geeky silhouettes. She strives to trigger a sense of “where do I know that?” 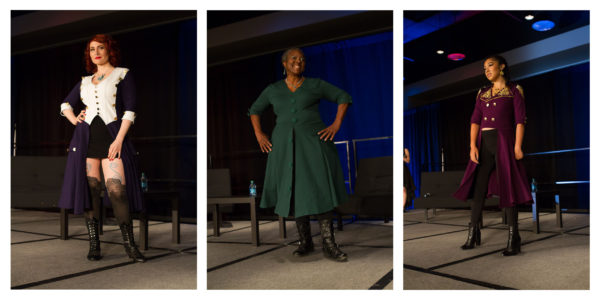 Catherine says the industry of geek fashion is growing. You can wear it around others—amongst the non-geeks (muggles, she called them) and you won’t be judged, as it’s starting to look perfectly normal. You can wear it to a meeting, to a presentation and they won’t have a second thought. While everyone else sees it at usual, may just do a second subtle glance, the other wizards know what’s up. They see the magic.

Booty and the Geek by Mags

Mags started out by making clothes for her and her friends. The rest is history.

She is inspired by character’s costumes—wanting to make basic, modern spandex clothing based on them. She doesn’t want to make costumes, though, but rather functional, comfortable clothing. Clothing that you can lounge in, but feel totally confident and a little sexy. Her studio is based out of her home in Brooklyn, and she makes everything from her perfectly tight apartment (for which she seemed totally enthused by). 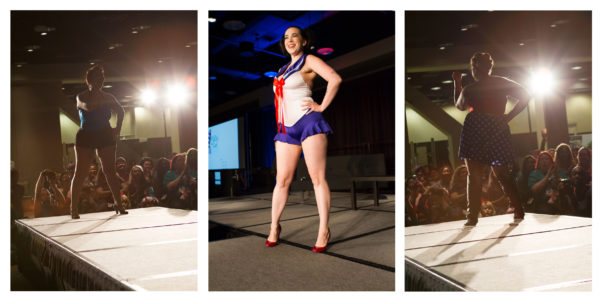 It’s not just geek fashion, but all fashion, Mags says. People need to be encouraged to embrace their bodies, which is why she makes her clothes for every body, and to have fun—that’s something fashion should strive for.

At a place like GeekGirlCon, we have no fear. No fear of showing what we love, quite literally wearing our fandom on our sleeve. It’s easy to sit down at a panel and start a conversation with the person next to you, something I did all day. Given your choice to attend the same talk, you already have similar interests. But outside of the con, whether at work, shopping for groceries, or just walking down the street, we don’t know if we have anything in common with the next stranger. When we wear geeky clothing, it not only has the opportunity to embody something that we love, but it embodies us. It says something about our preferences, and interests—and when we see someone else wearing a skirt, dress, or shirt that reflects a fandom that we also love, that’s the beginning of building a community (rather, stitching a community). 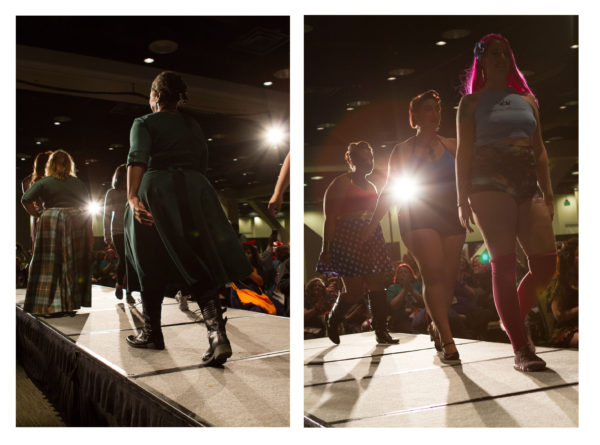 The GeekGirlCon fashion show brought us together. Women of multiple skin colors, body types, ages, and gender identities were represented both on stage and in the audience. Fans gawked at their favorite pieces as they were flaunted down the runway, and cheered when they saw someone just like them, smiling under the spotlight.

A very special thank you to our partners Espionage Cosmetics and VAIN, for which the GeekGirlCon Fashion Show 2017 could not have gone on, and thanks to DJ Trishy for providing some pretty stellar beats, and Outsider Comics and Geek Boutique for providing accessories for the show.

2 responses to “Stitching Together A Community: The GeekGirlCon 2017 Fashion Show”

Leave a Reply to Gifts for your Geek: The GeekGirlCon Holiday Gift Guide 2017 | GeekGirlCon Cancel reply