Panel Recap: Refill Your Hearts: Fandom Librarians Recommend Stories to Get You Through the Bad Times

Not going to lie, when I first read the description for Refill Your Hearts: Fandom Librarians Recommend Stories to Get You Through the Bad Times, I was a little skeptical. The panel was meant to be a group of fannish librarians providing personalized reading and viewing recommendations for the audience. According to the description, they would focus on uplifting fanfiction, online and self-published fiction, webcomics, tv shows, movies, and other media created by and centered on women; queer, trans-, and nonbinary people; people of color; neurodiverse people; and other marginalized groups. As someone who has read fanfiction for over sixteen years, I was specifically doubtful that the panelists would have read enough fanfiction in enough fandoms to make useful recommendations to the audience. I did love the idea that they might have a couple story suggestions that would fit my preferences, though, and I wanted to see how the panel would play out, so I gave it a try. 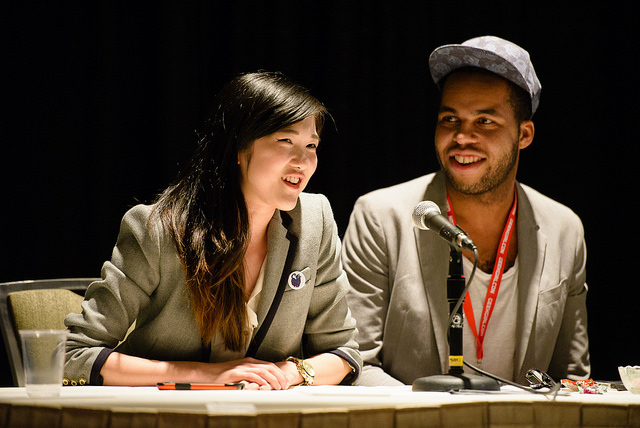 Okay, world, I’m putting it out there for all to see.

Hi, my name’s Kat and I write fanfiction.

That, my fellow geeks, is a sentence I never thought I would write, at least not in a very public setting. You see, I’ve always been a fan, especially of television. My love of TV actually led me to work in the industry itself. But as I worked hard day after day to be a part of creating new stories for television, I harbored a dirty little secret: I read fanfiction. A lot. As a recent similar confession on the GeekGirlCon Blog notes, reading fanfiction can be addicting! The fluffy ones are the gateway fics. Photo credit.

Unfortunately, even though many people who work in television began their journey the same way I did – as a TV fan – fanfiction is not exactly something that’s…acceptable as part of the culture. After all, we were creating the “real thing.” Here are the general ideas many in the TV biz have about fanfiction:

(Note: the legality and ethics of writing fanfiction is a whole topic unto itself which isn’t clear cut, and is worthy of healthy debate and exploration. For more info on that and a TON of other insight on reading and writing fic, I highly recommend Anne Jamison’s book Fic: Why Fanfiction Is Taking Over the World.)

Of course, many of these assumptions are generalizations that aren’t fair and aren’t true. Unfortunately, what they are is widespread, and not just in the television industry (though the industry does openly make fun of fic writers now and then). Add to that the fact that these stereotypes – especially the one writing fic off as the domain of crazy people (read: crazy women) and teen girls – are sometimes outright sexist. Now, most fic writers are in fact women, but gender has no bearing on the merits of any kind of writing. Regardless of author gender, however, there are, in fact, some terrible fics out there that play into a variety of stereotypes. But no stereotypes ever tell the whole story, and there are many, many fics that defy them.

Still, because of the stigma around fic, reinforced in the comedy world especially, I was essentially ashamed that I read it, even though it brought me joy and helped me cope with the long, trying hours as an assistant vying for a chance to be TV writer.

Five years in, I was fortunate enough to have co-written two episodes of a show, but I’d gotten so burned out on the TV industry that I decided to change careers. As someone who was and is such a passionate fan of TV, it was the last thing I ever expected I would do. I was confident in and happy with my decision, but knowing that being in the industry was no longer the right choice for my life broke my heart a little bit. What broke my heart even more was the fact I had grown to almost resent writing stories (for any medium).

This was me. Photo credit.

You see, I’d felt so much pressure to make my writing something that could sustain me financially that it stopped being fun. Being a storyteller is a big part of who I am, and I needed to rediscover the excitement of creating characters, of envisioning new worlds, of finding just the right words. I needed to remember those swirly, bright feelings of inspiration – the ones that made me beg my mom to let me use her PowerBook when I was seven to pound out a story about a kid who found a dinosaur egg.

I needed to fall back in love with writing.

(By the way, the approximately 100-word masterpiece “Dinosaurs in Time” is unfortunately still in search of a publisher. Preferably one who doesn’t mind reading a half-page manuscript featuring several typos and a barely discernible narrative structure.) On the plus side, the story also features plenty of wish fulfillment. Photo credit.

To fall back in love with writing, I knew had to take the pressure off. But that would be easier said than done. Every time I sat down to write, there was a part of me that couldn’t shake the expectations – this had better be good enough to get you an agent. This plot isn’t marketable; come up with a new one. The “financially sustainable writing” monsters in my head hadn’t quite been vanquished yet. I had to fight them with something new, with stories they couldn’t touch. But what sort of writing is done just for the sheer joy of writing and sharing stories, with no expectations as far as career advancement or paying the bills? What sort of writing is done simply to celebrate beloved characters and worlds? The answer, of course, is fanfiction. I hesitated; surely this was “beneath” a “real” writer, which is what I wanted to be. However, despite my reservations, I admitted that fic just might be my ticket to really enjoying writing again. Turns out, I was right. As soon as I decided to start writing fic, a flood of ideas raced into my head. I scribbled them in a notebook so that the plot bunnies couldn’t hop away, and I took to my computer to get going on my first story. An hour or so later, I was done. You know the feeling you get when you step outside on a crisp spring day and that first breath of fresh air fills your lungs? That was this moment. I felt happy, I felt renewed, and I felt like me again.

What was most refreshing about this was that for the first time in a very long time, I didn’t hate the writing process. It wasn’t arduous or overwrought. In fact, I had so. Much. Fun. My “dirty little secret,” it turns out, was the thing that made me realize that I am a “real writer” just like I wanted to be. For a while there, I had simply forgotten what a writer is:

And you know what? I love being a writer.

Kat Heiden is a writer, nonprofit development professional, communications grad student, and proud geek girl. She and her equally geeky husband make their home in Los Angeles as they await their invitation to move onto the TARDIS.

Nope, definitely not obsessed about anything in my life. There’s not a television show, a book series, a movie universe, or anything else in my everyday life. Certainly not ice cream or Trader Joe’s Joe-Joe cookies.

Truthfully…I do have one fairly all-encompassing obsession. It’s something I’ve been into since college, which means pretty much since the beginning of Internet popularity (as I’m older than I look!). It’s safe to say this is my longest running obsession. Yes, I said it. I’m obsessed with fanfiction.

For those who don’t know, fanfiction is stories written by fans of a show, movie, book, or video game using the characters from that show, movie, book, or video game. Fans don’t make money with their writing, which is why it doesn’t infringe on copyrighted material that belongs to the authors or creators. You can find fanfiction of all different kinds on the Internet. Here’s a small sample of television shows from one of the fanfiction sites I spend a lot of time on, Fanfiction.net:

The links will take you to the pages of fanfiction written for that show. The numbers beside each title are the number of pieces of fanfiction. Glee has over 105,000 stories written for it! Links for the most popular movies, their numbers included again, are here:

I don’t know how I got started reading fanfiction; I know that I started writing fanfiction one semester when I was avoiding studying for exams. The story I wrote, which was based on the television series Highlander, was handwritten in the space of several notebooks and at least 100 sheets of loose leaf paper in a binder. I don’t remember specifically what it was about, other than immortals, but I can tell you where it is: the clear tub with the green lid, currently under my bed. There are also random stories I have written for various fandoms on different sites on the Internet.

My favorite types of fanfiction are the ones which are well written, with a clearly defined background, a good plot, and characters I know written the way they would act in their respective shows. Much of the fanfiction on the Internet is, truthfully, awful. If the grammar is bad, I usually can’t read it.

I suppose, since I’m confessing, I should tell you the fandoms I tend to read. I know it started with Highlander, but I’ve come a very long way since then. At the moment, I’m fairly embroiled in the Marvel Studios world of Captain America, Iron Man, and Thor. This includes all of the movies made at this point; covers the main characters, some of the supporting characters, and sometimes original characters. I’ve also spent a lot of time reading fanfiction for Stargate (the movie, SG-1, Atlantis, and Universe), Star Trek (all of the series, as well as all of the movies), Buffy the Vampire Slayer, Supernatural, Doctor Who, and The West Wing–among many others. I also enjoy a well done crossover: Harry, Ron, and Hermione running around with Colonel O’Neill and SG-1 can be pretty fun as well. Why do I read fanfiction?

Why should YOU read fanfiction?

If you are easily addicted, you probably shouldn’t.

If you want to know where to find the good stuff, start at Fanfiction.net. They have a huge variety, including crossovers you would never think are possible. A smaller site with a lot of quality writing is Archive of Our Own, and it is where I’m finding most of the Captain America fiction.

What are YOU obsessed with?