Why I Love the Fourth of July

For many people, and in latter years I think particularly, the Fourth of July is a mixed bag of emotions. Everyone loves an excuse to have friends and family gather around to gorge themselves on Costco hot dogs, vats of potato salad, and luscious summer watermelon. The weather is (generally) pretty good in most places of the US, and it is a day off work for many to celebrate the bravery of the founding fathers.

But with the good can also come the bad… Political tensions are running high. Fireworks can often be seen as a nuisance. Perhaps you are a person suffering from PTSD, a small child scared of loud noises, or a pet fearing the apocalypse. Or maybe you are just a person who enjoys peace and quiet, which is okay too. No one likes being taken off-guard by the random whims of the neighbor down the street who only get the kind of fireworks that are so loud they rattle your windows. Beyond that, fireworks are expensive and are also a safety hazard when handled improperly.

When asked, most people will proclaim Thanksgiving or Halloween as their favorite holiday, but I would have to say that the Fourth of July is one of mine for a very special reason.

When I was little, we were pretty poor. My dad worked a crummy construction job for a slum lord and my mom was a bookkeeper for a few small businesses. While my parents always made sure that we always had everything we needed, with three kids there wasn’t a lot of room in the budget for luxuries.

As an adult, I now kind of see fireworks as a symbol of literally burning money, so it is surprising to me that my father would insist that we buy fireworks every year, even if it was just a few. My town was small and there wasn’t a community fireworks show until I was older, so if you wanted fireworks you had to buy them yourself. I remember getting positively giddy when I would see the small Lion’s Club stand being erected in the grocery store parking lot at the end of every June. I would scour the couch for coins, saving up to buy my favorite firework, The Climbing Panda. As the calendar flipped from June to July, I could barely contain my enthusiasm, and sure enough, the time came to purchase our fireworks to celebrate America’s birthday.

I was the middle child of three. My older sister was a strong willed wild-child, and my younger brother always needed more attention as the baby. With young kids and working full time, it is hard to find one-on-one time with any of your children, but my dad made it happen for me every Fourth of July. A few days before the big day, my dad would scoop me up and whisk me away to the store to pick out the fireworks, just the two of us.

I would hold his hand as we walked up to the red shack, savoring the scent of gunpowder. It was so unlike any smells that I would encounter normally and it acted like a stimulant to my excitable mind. I would stand on the little wooden steps that the proprietors placed before the stand so that the smaller patrons (ie, me) could see over the counter. I remember emptying the coins from my pocket, carefully counting them out, and asking politely for a Climbing Panda. Looking back on it now, it is slightly laughable that the Lion’s Club would sell a small explosive to a six-year-old, even if I was accompanied by an adult.

My dad and I would look over the wares of the stand carefully, calculating out how many sparklers we would need. Ten in a box, three kids (plus some of the neighborhood kids), two adults, and at least one box of each color. We would pick up a few Roman Candles, some smoke bombs and ground flowers. Then my dad would point to a twenty dollar pack of bigger fireworks, and I would goggle at the fortune he was spending on something that would only last for a night. Twenty dollars seemed like quite a lot compared to my ninety-nine cent panda.

Once the sun went down on the evening of the Fourth, we would get to show off our selections to my family and the neighbors. We would pretend to be fairy queens with sparklers, and army commandos with the multi-colored smoke bombs. Pop-its littered the sidewalk as ground flowers glowed in their short, whirlwind blooms. Dad would be the lead technician, always stressing safety when enjoying fireworks. I would snuggle in a blanket near my mom as we watched the glow and pop of the mostly fountain-style fireworks, and most of all, my Climbing Panda. And in a whiff of sulfur, it was over and it was time for bed.

Now I am an adult, and my dad and I aren’t on speaking terms. Life happens, and the years go by, and all that other cliche stuff. Oddly though, even after all these years and everything that went down with my dad, I still get excited about the Fourth of July. I will walk into a fireworks tent, smell the gunpowder, and I am instantly transported back to being a little girl counting out sticky pennies to buy a tiny firework. And I remember how much fun I had with my dad.

Fireworks are kinda like life, yeah? An expensive and inconvenient nuisance that might burn you, but beautiful to behold, best shared with friends and family, and over far too quickly. So, things might not be great now–like my relationship with my dad, or the state of our country–but that doesn’t stop me from looking forward to better times. And when those better times come, I will appreciate them all the more for knowing that the moment is fleeting.

That is why I love the Fourth of July.

Happy Independence Day everyone! If you are planning on enjoying fireworks, always practice proper fireworks safety! And please remember to be courteous to your neighbors. 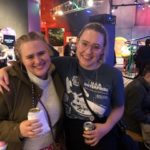 Gallery image with caption: Kicking Off GeekGirlCon ’19 at PacSci! 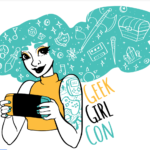 One of Becca’s earliest memories is watching her mom play The Legend of Zelda on their NES. Fascinated by the storytelling medium of video games, Becca became an avid gamer. From MMOs like Final Fantasy IVX to catching them all in Pokémon, Becca loves the experience of watching a good story play out. This love of storytelling didn’t just stop at video games. Becca loves watching movies and television shows, and of course reading almost anything she can get her hands on! Favorite stories include Harry Potter, Game of Thrones, Star Trek, Sailor Moon, Lord of the Rings, and a whole lot more. Becca is a native of the PNW. She was born in Aberdeen and worked as a pastry chef in Seattle for 10 years before returning to school. She recently graduated Magna Cum Laude from the University of Washington Bothell and is looking forward to her next adventure.

One response to “Why I Love the Fourth of July”